Attending an ANZAC Day dawn service has long been on my ``good intentions’’ agenda.
This year I make it, albeit with help from my mate Ken Henderson who picks me up more than an hour before dawn. The Cranmer Square venue is abuzz when we arrive. We walk past the assembling parade of war veterans adorned with their medals and contemporary service men and women. Parade leaders are on horseback. Immaculately restored veteran army vehicles are amongst standouts.
The partially lit venue is unmistakably eerie. 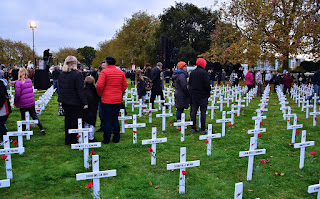 This is especially so when navigating through some of the 14464 memorial crosses, one for every service person from the wider Canterbury region killed during 1916 and 1917. More will be added next year to cover 1918.
Further dire statics include a total number of New Zealand service men and women killed in WW1 being 16,687, or 58 per cent of those involved. Even more sobering when noting the total New Zealand population in 1916 being a mere one million.
This year marks the 102nd anniversary of Gallipoli landings. It is also the closest ANZAC Day to marking the centenary of Passchendaele, the most costly event, in terms of New Zealander lives lost, during WW1.
I learn a few things. Apparently office workers, and others, weary of typing Australian and New Zealand Army Corps coined the long-standing abbreviated ANZAC.
Also, the dawn service is appropriate because that is the typical time to expect an attack, hence troops are alert.
Pleasingly, the Australian component of ANZAC is worthily acknowledged with Australian representatives attending and our band and choir presenting a passable rendition of Advance Australia Fair.
The oldest war veteran attending is 104. I am pleased to hear of the attendance of the Japanese Consul of Christchurch, Mr. Mitsuru Murase. 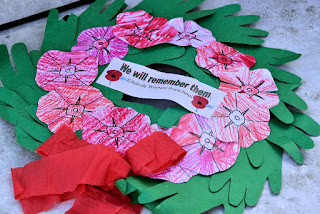 So, what do I think of the experience in the chilly pre-dawn?
I suspect my thoughts, along with many others are of the wanton waste of, mostly, young life. Have we learnt anything re the futility of war?
I was brought up with the belief that those killed were sacrificed for democracy and for a better life for future generations. We can all appreciate that. Sadly, the lack of ideal reconciliation at the end of WW1 laid the foundation for the rise of Hitler and an even more savage WW2, ending with the first use of nuclear weapons.
I cannot help thinking of the many occasions when New Zealand rushed to join allied countries in conflict.  I am thankful, these days, New Zealand has a more independent foreign policy beginning 30 years ago when the New Zealand Government passed legislation rendering New Zealand nuclear-free. I was too young to participate in world conflicts although many of the older generation Sinclairs did.
I appreciate being able to live my life during an era of comparative world freedom. I have seen friendships forged with former enemy nations and regularly meet people from those countries. Maybe my own appreciation of the era I have lived in is expressed in the peace movement I founded a dozen years ago – The New Zealand World Peace Bell. The bell is located in Christchurch Botanic Gardens.
On ANZAC Day the Christchurch Tramway offered its appreciation by offering war veterans free rides. 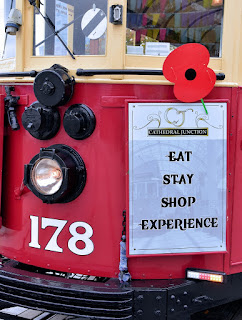 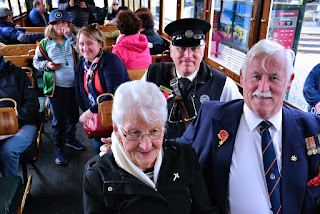 Posted by Journeys with Roy at 16:11 No comments: 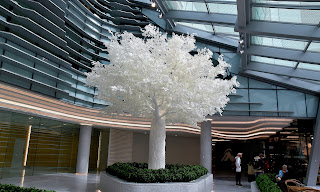 On my way to an Easter photo assignment in central Christchurch, I called in for a coffee at Arbo Café in the new ANZ atrium in High Street. The interior emulating a generous hotel lobby is identified by its centrepiece, a 6 metre-high glass tree.
I am not a great fan of all these ``glass’’ buildings popping up in the newly rebuilt Christchurch but Arbo Café is a standout. It had been open for about three weeks.
My Americano was perfect as was the accompanying cheese scone.   I cannot resist a cheese scone but am typically served with something disappointingly soggy. This one was the crisp exception. 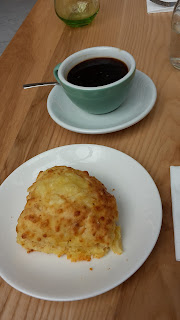 Arbo manager, George Cullen, says they are presenting café fare based on what your grandmother once prepared albeit with a contemporary twist.


In addition to offering the welcome coffee break, Arbo offers breakfast and lunch.   On Thursday and Friday evenings the venue becomes a bar to entice city employees keen to wind down at the end of the week.  Part of the same business is the street-side Arborista intended for a coffee stop on the move. Another attribute is Arbo and Arborista having a proximity to the city’s heritage tramway route. Tram drivers routinely recommend the café. The CBD is becoming well served with cafes. Just as well as hundreds of office workers are on their way to take possession of desks in newly built space. Posted by Journeys with Roy at 17:30 No comments:

Hopping along at Easter

My Easter travels were not greatly adventurous. But I did spend much of one day pleasantly hopping (literally) on and off Christchurch heritage trams. I was assigned, with my camera, to follow Easter Bunny dishing out Easter eggs to tram riders. 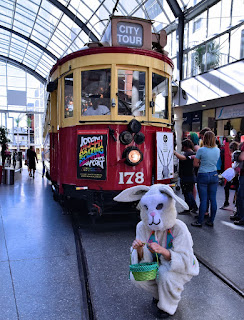 I was informed the person within the convincing rabbit suit was Kate.  So I spent the best part of four hours with ``Kate’’ without having a clue as to what she looked like – apart from someone entombed within a rabbit costume. Her speech was muffled so conversation was necessarily minimal.   I did learn that the mysterious ``Kate’’ belonged to a local theatre group. That explained her ability to pose like a rabbit and relate to strangers. Of course, for the four hours, Kate was supposed to be seen as a rabbit, not as a young woman. I was a small number of people who knew the person within was`` Kate.’’ I did find out she was a good friend of tram driver, Tom.
Not so curiously, Tom was the first tram driver to know the Easter Bunny was going to be part of a fun day on the Christchurch tramway. 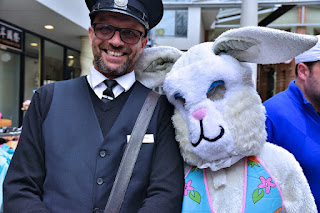 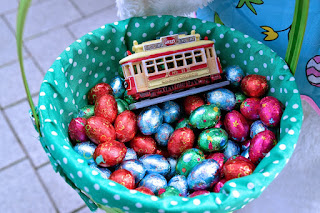 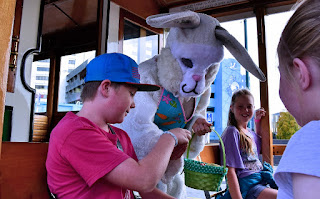 Adults were mostly pleasantly amused by Easter Bunny. Trams were continually crowded with a mix of local people and visitors to Christchurch. Easter good will was to the fore. Tramway staff took to Easter Bunny as a good fun add-on to their day and were keen to have their photograph with Bunny.
The only drawback for ``Kate’’ was the autumn day hitting 23 deg. after several cool, wet, days. No wonder Easter Bunny preferred to stand in the shade.
I eventually spotted the real Kate when, in the tramway office, she removed the rabbit head part of the costume. She reluctantly agreed to a photograph. If, during the previous four hours, I had a vision of ``Kate’’ then it was way off the mark.
The assignment was one of pleasant curiosity. 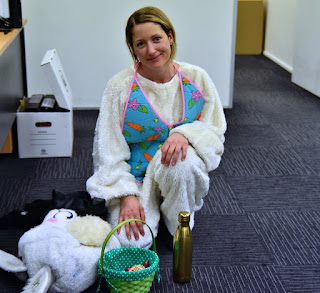 Posted by Journeys with Roy at 16:25 No comments:

Fine dining when rolling along a tram track
An evening dining out must fulfill two requirements. First the food has to be superior to daily offerings and secondly, the ambience needs to be somewhat different from the norm. Happily a recent experience on Christchurch Tramway Restaurant brilliantly ticks those boxes. I am with my mate Ken Henderson and we are helping a colleague, Gerhard Eickenhorst from Switzerland, make the most of his last night in Christchurch. The tram ride and dining is tropically a two-hour event. Along with the familiar rumble of steel wheels on rails is the continuous babble of about 30 accompanying diners. I have the impression of enjoying an extended happy hour which essentially it is. Along with all other goodies is experiencing the city after dark. The lit-up Bridge of Remembrance is particularly spectacular. Tram driver Barry kindly stops long enough for me to take photographs, even inching the tramcar No. 411 into the composition. 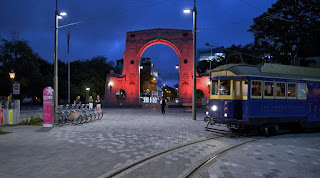 Maitre di Jannetta is excellent, keeping our glasses topped up with an agreeable Sanctuary pinot noir.  Her assistant Murray deftly moves through the slightly swaying tramcar expertly managing a tower of prepared orders. 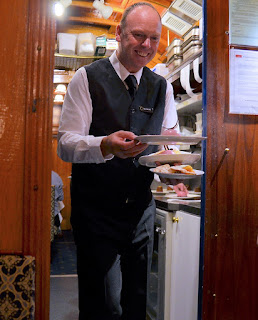 I must point out that everything is prepared on board pretty well from scratch. We are not party to a constant whirring of a microwave. I am reminded a documentary featuring movie star Peter Ustinov on the famed Orient Express. He visits the galley in the dining car, liking it to be what he would expect to see in a submarine, and expressing his amazement at the food preparation quality.
The same can be said for the galley on the Christchurch Restaurant Tram.  I pluck up courage and ask chef, Christian, to glance up momentarily for a photograph.  His food is such I wonder if he would take out MasterChef without too much effort. 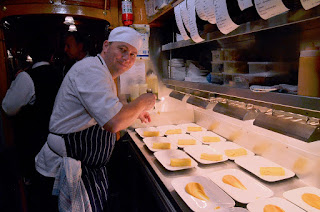 For entre I go for Mille feuille with brazed leek and aged cheddar. Tastes are way beyond reach of my own culinary efforts at home.
My mains are Slow roasted lamb with a sumptuous potato gratin and seasonal greens. Again, taste buds are applauding. 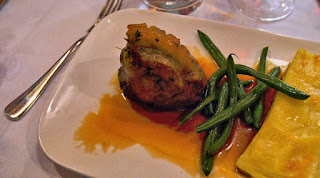 Dessert is a cheese cake I accompany with a glass of pinot gris.
This is my third Christchurch Restaurant Tram experience over about five years.


I have experienced a worthy progression in quality, both in the food and overall experience. Ear-to ear grins from our Swiss guest say it all. 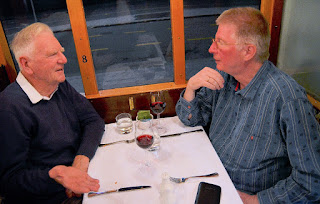 Posted by Journeys with Roy at 15:50 No comments:

I like to think back on what I was doing at such and such a time. In September, for instance, I think about cycling over Switzerland’s 2436 m. Furka Pass. That was almost seven years ago.  Maybe it’s about nostalgia? Maybe it is merely exercise for a 73-year old brain?
Whatever, this particular thinking relates to just a week ago on March 25, 2017.
I was leading a support team of three for my partner, Haruko, and daughter, Kirsten, competing in Le Race. They first competed in the 2015 event. It is a daunting 100 km road cycling course from Christchurch’s Cathedral Square to Akaroa utilising the high-climbing Summit Road route from Hilltop to Akaroa. It is not the largest New Zealand cycling event (that statistic goes to Round the Lake- Taupo) but Le Race is the toughest hill climbing event with fast downhill sections.
The day began with heavy drizzle that luckily soon dried out. Even so the competitors were climbing into low cloud. If going uphill is tough, downhill on a road bike is done with trepidation.  And if competing requires mega strength and dogged determination, being a support team is fraught with a little anxiety, particularly when supporting family members. My two completed the event comfortably, without problems, within the six-hour limit. Their exhaustion did not stop them tucking into a lunch of magnificent Akaroa fish and chips – the best in New Zealand. Assisting me was my son Michael, visiting from Perth and another son, Paul, visiting from Auckland.
A real hero of the race was 19-year-old Keagan Girdlestone.  In 2014, aged 16, he had been the youngest cyclist to win Le Race. But just 10 months before this year’s Le Race he had a serious accident in Italy- so serious he was told he would never cycle again.
He finished in 3 hr.11 secs. Placing him in the top 450.
Fastest times; Men, Brad Evans 2 hr.41 min. 45 secs.
Women, Charlotte Lucas; 2hr. 58 min. 42 secs.
I would call that effort Super Human. 700 competed this year. Estimated combined cost of their bicycles, $2.8 million. 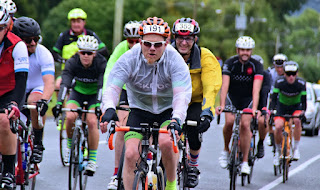 A peloton passing through Little River. Unlike their supporters, they did not stop for coffee. 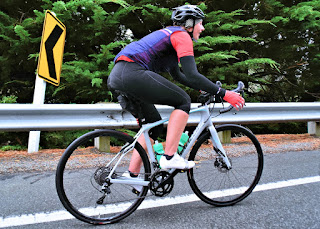 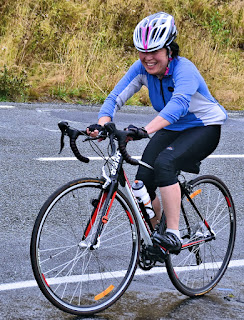 Still smiling, Haruko near Hilltop. Much of the effort still to happen.
Posted by Journeys with Roy at 15:30 No comments: