Mournful and moving –in stone This is a monument I have revisited on several occasions. First time was in October 1997. It was autumn. My interest was aroused when seeing a reference to Mark Twain in the guide book.
Next time I spotted the name Lowendenkmai Dying Lion of Luzern, was in 2006. We were cycle touring in Switzerland. It was raining. On this occasion the monochromatic sculpture chiselled from the rock cliff contrasted with the red summer blooms.
It is as colossal in pathos as it is in size: Six metres tall. 10 metres long, it sits in its lair chiselled from the cliff rising from a natural quarry. A broken spear protrudes from its side. Its legs are pulled against its body. There is a collection of broken weapons and a shield embossed with the Swiss Cross. Tears from the lion bubble in a pool several metres below the cave.
Surrounding the monument is an English-style garden with tall trees.
The Latin above the cave translates Faithfulness and bravery of Swiss men.
The lion appealed to Mark Twain, a sarcastic albeit humorous writer who played of the fragility of the human race.
He observed lions do die in such settings. He described the lion the ``most mournful and most moving piece of stone in the world.’’
Its unveiling in 1821 remembered the Swiss Guard (mercenaries) in service to King Louis of France when his own guards were no longer loyal.
The Swiss were seen as a reactionary of the monarchy. They were killed to the last man by revolutionaries on the night of August 10, 1792.
The massacre ended the Swiss offer of Foreign Service in France.
King Louis XV1 and his Queen were guillotined in 1793.
The monument was controversial from its beginning.
Republicans and liberals did not like praising mercenaries.
To others it represented patriotism and adherence to duty.
In 1878 the Massacre was less than a century old.
Mark Twain wrote: `` Louis XV1, as a private man would have been lovable but as a King he was strictly contemptible. His was a most unroyal career. But his most pitiful spectacle was his treachery to his Swiss guard.
``Queen Marie Antoinette was trivial and foolish. She had made the most unwise mistake of being born.’’
And the Lion of Luzern might not have been `if Napoleon the first had have stood in the shoes of Louis XV1 instead of being that day merely a casual and unknown looker on.’’
Mark Twain was in Luzern primarily to buy a cuckoo clock. He bought three. He refused to buy any of the tacky souvenirs of miniature lions.
His descriptions of Luzern, Switzerland’s medieval city, pretty well match what today’s travellers expect.
The lion monument is the same. Away from busy streets it is approached through a gate that is never closed. The lion is as poignant as it is inaccurate.
Styled largely on models seen in collections in Rome, little effort was made to study the living creature. Its pained face is designed to evoke sympathy. It is typical of 18th century romanticism.
The rain eased long enough for me to try and capture that elusive something that inspired Mark Twain to call it the most mournful and moving piece of stone in the world.
The rain returned, saturating our bicycle seats. It was seeping through unzipped nooks of our rain jackets. Down our necks. We opted for a good lunch.
In 2010 I made my third visit to the Lion. It was Sunday morning. For a time it was quiet. Then tourists arrived to spend a few moments, obviously with little understanding of what it is about.
Just something to tick off as a ``done that’’ sort of visit. 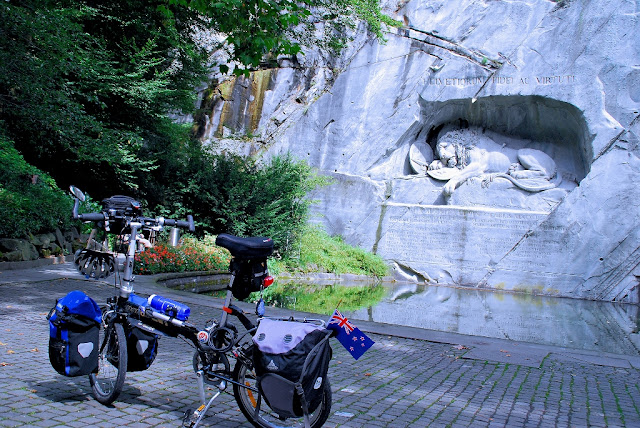 Posted by Journeys with Roy at 20:13 No comments:

Nostalgia to cheer a cheerless day

I admit to being a tad bored on a dismal winter day. Persistent drizzle and trees displaying bare branches.
I dabbled into a photo file `Roy’s choice.’’
I was reminded of many mega bicycle trips through Scandinavia and France.
Have chosen three images to share. 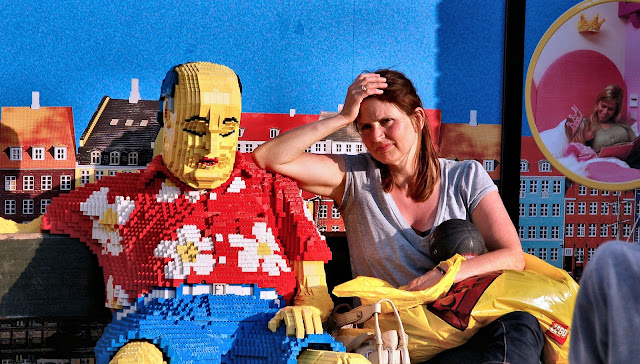 First up is a view at the end of an inspiring, albeit tiring, day at Billund Legoland, Denmark.
The weary woman leaning on a Lego companion sharing her seat sums up the feeling. I ask which figure is real.  Both display similar animation.
Legoland is expensive entertainment. Luckily the expense is offset by the brilliance of the experience comprising 85 million Lego blocks.
Billund is a smallish town with an international airport, only second to Copenhagen in air traffic.
Why?
So happens Billund is where Lego originated. The blocks are said to be the 1930s invention of local carpenter, Ole Kirk Christiansen.
It was well worth the additional ks of pedal turning to get there. 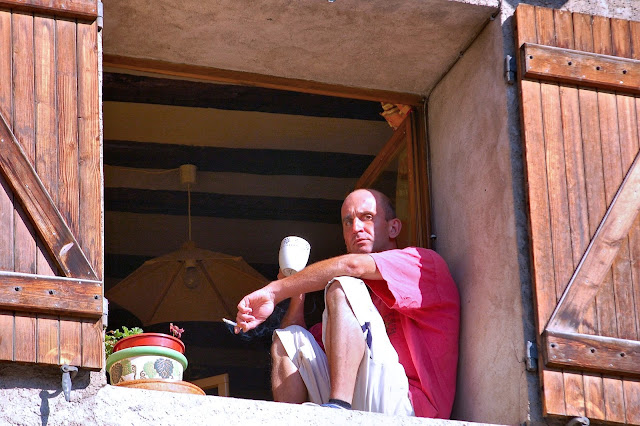 Two years previously we were cycling the French Alps. We cycled over four cols associated with the 2006 Tour de France. We camped in several quaint French villages.  One morning when departing Briancon I glanced up to a rustic barn to see this guy on a coffee break. His accompanying lamp and pot plant intrigued me. I wonder if he has spotted me. Maybe he is just bored. 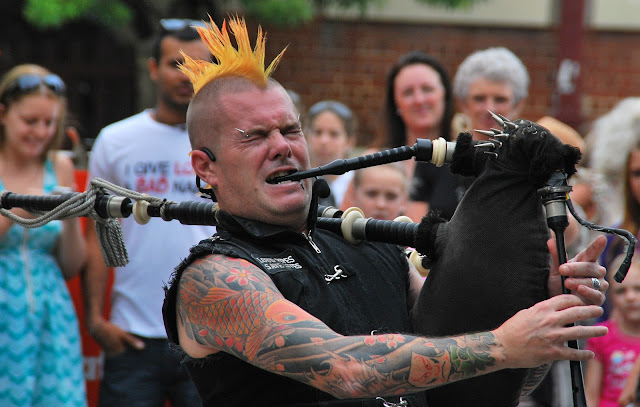 Then in Fremantle (Freo to the locals) we uncounted this amazing punk busker. He was playing his heart out. I enjoy bag pipe music and his suitably bellied his unruly appearance. I tried to purchase his CD on offer but could not make it through his audience. He was performing at Fremantle’s popular markets. I have cycled to Fremantle, from Perth, about 30 km, on several occasions. A great ride mostly on dedicated cycle ways bordering the Swan River.

Posted by Journeys with Roy at 20:36 No comments:

Many events vied for attention this week.
Standout for me was the 30th anniversary of New Zealand being nuclear-free. 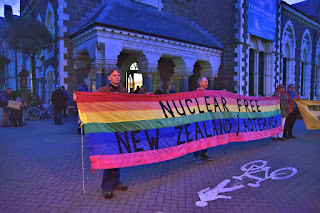 The then Labour Government led by Prime Minister David Lange passed the Nuclear Free Zone, Disarmament and Arms Control Act 1987. The day was June 8.
Amongst the new rules nuclear armed or powered ships were banned from New Zealand.
Nuclear weapons could not be carried by sea or air.
And a Minister of Disarmament was established.
The labour Government had swept to power following a snap election in 1984. The party had campaigned on a flagship anti-nuclear policy.
In Christchurch this week celebrations commenced with the ringing of the World Peace Bell in Christchurch Botanic Gardens. (For the record, it was myself who inaugurated the New Zealand World Peace Bell. While working on the Press newspaper I discovered a story about a Shikoku mayor Chiyoji Nakagawa having a bell cast from melted coins of New United Nations members to forge a large bell. He presented this to the United Nations in 1954 with the hope that what had happened to his country should not happen to any other. I thought mayor Nakagawa was a brave man. So was David Lange in going for an anti-nuclear policy.) 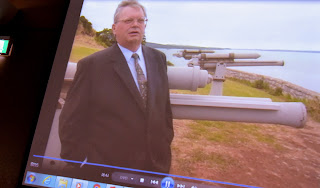 The year after becoming Prime Minister, Lange took part in the Oxford Union debate taking the side of ``nuclear weapons are morally indefensible.’’
His opponent was right-wing evangelist Jerry Farwell. Lange’s brilliant performance on an international stage meant New Zealand was no longer an insignificant backwater.
Following the anti-nuclear legislation being passed two years later some countries, led by the United States, were quick to protest. It became known as the ``New Zealand’’ disease with fears it might be contagious.
New Zealand’s status as an allied country was downgraded.
The principal opposition party, National, opposed the anti-nuclear stance until Prime Minister Jim Bolger announced all political parties would support the nuclear ban. It has since become part of the New Zealand psyche. 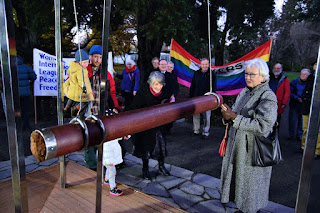 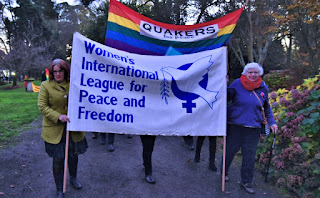 The ringing of the World Peace Bell this week was followed by a procession of banner carriers to nearby Canterbury Museum for a panel discussion chaired by Councillor, Phil Clearwater.
Leading the panel was Kate Dewes whose peace campaigning began in the 1970s supporting the brave Peace Squadron of small boats that would be  launched on Auckland’s Waitemata Harbour to confront the arrival of naval vessels that could possibly be nuclear armed.
Dewes was accompanied by Natasha Barnes (aged 31) who spoke about peace from a young person’s viewpoint and Graham Kelly, former MP of the Lange Government.
Kelly says the anti-nuclear legislation was 40 years in the making. It was built ``block by block.’’
One event leading up to 1987 was New Zealand and Australian warships, in 1973, protesting against French nuclear teasing at Mururoa Atoll. 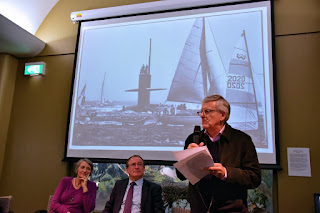 A one-time vocal anti-nuclear opponent was Deputy Prime Minister Don McKinnon. I recall McKinnon telling us to `` love the bomb.’’
Later, a more enlightened McKinnon said   ``New Zealand must have the most powerful and well organised peace movement in the world.
``I fought against it but I don't mind being beaten on this issue because ultimately the will of the people will prevail.’’

Posted by Journeys with Roy at 19:44 No comments: