I am delighted to learn of something new, especially is it is about something I had never heard before. For example, earlier this year I found out that June 3 was UN International bicycle day. And a few days later, June 17, is Iceland’s National Day celebrating Iceland’s independence from Danish rule on that day in 1944.  More recently I discovered December 11 is International Mountain Day. Adventurer and author, Greg Mortenson, shared the item on Facebook. The 2019 theme was ``Mountains matter for young people.’’ 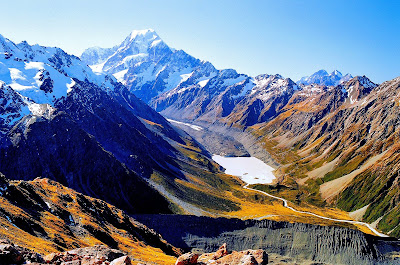 Young people are active agents of change and will become our future leaders. They are custodians of mountains and their natural resources, which are threatened by climate change. Let young generations to take the lead, so that mountains and mountain peoples become central in development agendas, consequently receiving more attention, investments and research. We need to educate children about the role that mountains play in supporting billions up and downstream – by providing freshwater, energy, food and recreation. Life for rural youth living in the mountains can be hard. Many young people leave upland rural districts in search of a supposedly better life and employment (which) leads to abandoned agriculture, land degradation and a loss of cultural values and ancient traditions.

My early memories of travel were to Arthur’s Pass, a village surrounded by mountains in New Zealand’s South Island. I was aged five and awed. Arthur’s Pass was reached following a spectacular three-hour rail journey crossing gaping river gorges and passing high country lakes lapping the base of mountains. My father took charge of these early adventures. He belonged to a mountaineering club so we all followed including our long suffering –albeit non-complaining, mother forever struggling to carry the family holiday needs in improvised luggage carriers. One was a less than suitable retired hat box. 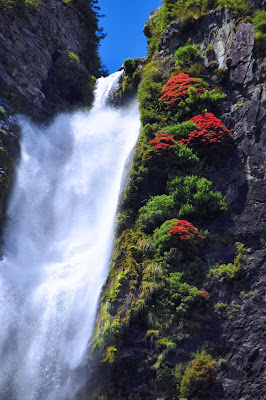 Arthur's Pass Devil's Punchbowl waterfall and rata
Railways and mountains became my life’s big interest. I had to have mementos of my big interests – hence my life-long passion for photography. No wonder my great desire was to visit Switzerland. It was not until well into my 50s that I made it. Last year I made a fourth Swiss visit. I had become interested in mountaineering and mountain ``tramping,’’ as we call hiking in New Zealand. My acclaimed summits were not greatly spectacular but were immensely satisfying. Later, mega bicycle travel included mountain regions such as the French and Swiss Alps. I have cycle travelled through the Japanese Alps and those in Norway. Alpine regions have become magnets for my preferred travel destinations. 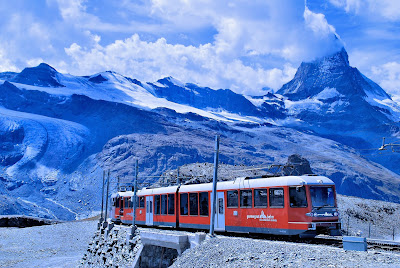 Gornergrat Bahn and the Matterhorn, Switzerland

Having parents prepared to encourage an interest in mountains and the great outdoors is something I have been thankful for. I tried to interest my own children in outdoor adventures and have been delighted to be partly successful. My adult daughter has travelled to Patagonia and, in Tanzania, summited the 5875 m. Mount Kilimanjaro. No wonder I was fascinated to discover an International Mountain Day with a theme, ``mountains matter for young people.’’ Thanks to Greg Mortenson for sharing the information. I enjoyed his book, Three Cups of Tea. The web link below is worth a look. 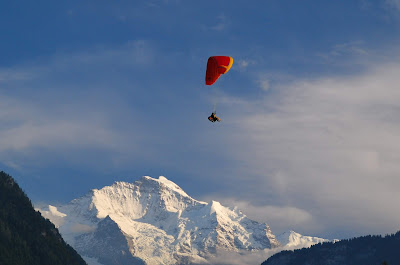 Top of Form
Bottom of Form


Posted by Journeys with Roy at 18:32 No comments:

T
tRTragedy struck in New Zealand at 2.11 pm on December 9, 2019 when an offshore volcanic island, Whakaari (White Island) erupted when 47 people were visiting.  Two weeks later, the death toll was 19. Some were tourists from the cruise ship Ovation of the Seas berthed in Tauranga. The few who survived were rescued by helicopter pilots who arrived on the island soon after the eruption. They operated a tourist venture to Whakaari so knew the terrain intimately. That authorities prevented them from returning to the island will remain controversial. Also controversial is why people were able to visit a volcanic island in the first place. Uncertainty surrounds any resumption of island visits. I certainly put a hand up for resumption of tourist ventures having visited the island in February 2011. Being away from home, I missed a massive earthquake that robbed 185 lives in Christchurch on February 22. Missing an earthquake followed by standing on a live volcano may have been pushing luck too far? I had concluded a bicycle of East Cape in Whakatane. My relocated Scottish host, Hazel Agnew, was keen to visit White Island. Would I join her? I certainly would. Whakaari is a ``submarine volcano’’ having more than half its 750 m-height under the sea. It was named White Island by Lieutenant James Cook, who on October 31, 1769, spotted it nestling beneath a perpetual white cloud. He did not realise it was a volcano.  That discovery awaited the arrival of the Reverend Henry Williams in December 1826. A one-time naval officer, Williams landed on an island of sulphur.

It It looks sufficiently desolate to be dubbed a moonscape. But this ``moonscape’’ punches jets of steam into an indigo sky. Rocks are stained yellowish-green. Grey mud bubbles. The ground rumbles.

I I felt a rising anticipation as the island loomed larger during the 49 km launch trip from Whakatane. With a slender thread of white steam rising from its highest point, Whakaari was certainly enticing. We had been thoroughly briefed on the risk of landing. As with an earthquake, no-one can be sure of an impending volcanic eruption. 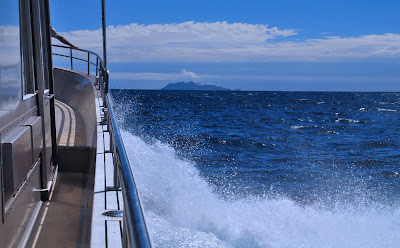 Whakaari is a scenic reserve in private ownership. A variety of owners over the years have been involved in mining sulphur for fertiliser. In 1997 the ownership was vested in the Gwen Buckland Buttle No. 2 Trust. In the same year Peter and Jenny Tait became official guardians.

A A few years previously the couple had given up farming to develop Pee Jay Tours operating from Whakatane. On the day of my White Island visit, Peter Tait was skipper of PeeJay V, a modern 23-metre vessel built in New Zealand. Peter’s son, Isaac, was one of our guides. The voyage lasted more than an hour.

OOnly two small bays permit landing on the island and they are both exposed to a swell. Bouncing inflatable dinghies ferried us to an old concrete jetty. It’s a matter of grasping the handhold rail on a rising swell before the dinghy slumps into the next trough. Our guides shouted, ``Go, go, go.’’

On shore, standing on an active volcano, Isaac conducted further briefing. We must keep together to avoid the risk of literally stepping into hot water, or worse. We had to wear hard hats, and carry gas masks to use if the sulphur became overpowering. 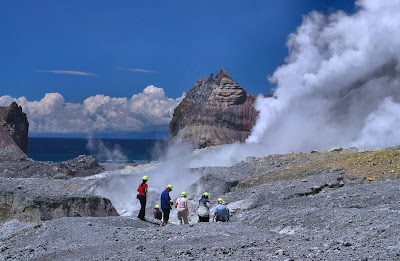 OOur surrounds were both spectacular and threatening. I was delighted we could get within an arm’s length of hot steaming vents such as Donald Duck Crater and Peelay Crater. (Craters have names for scientific identification)

EWe walked through the base of a former crater to a high point on the rim and peer into the steaming cauldron of Main Crater.

SSulphur mining on White Island started in 1885. Disasters temporarily closed operations. Soon after re-opening in 1914 12 lives were lost when part of the main crater rim collapsed sending a lahar to demolish the mining facilities.

reRescuers digging through steaming debris found no trace of men or buildings. Some wreckage was later washed up at Tauranga.

As a workplace, White Island had a deservedly tarnished reputation.  For all that there was no shortage of applicants during the 1930s depression. Many sighting the steaming, desolate, landscape remained on the ssship. 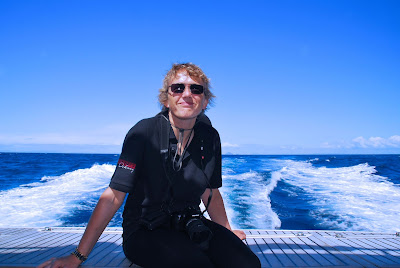 Whakaari is the northernmost volcano in Taupo Volcanic Zone, sitting on the line where the Pacific Plate and Indian-Australian Plate meet.   These days the island is of particular interest to those working for the and Nuclear Sciences located at Wairakei. Staff visit the island every two months to record surface deformation, and their solar-powered seismograph continually measures earthquake and volcanic tremors.

DDaily guided tours also assisted in gathering valuable information. Our guide told us of the visible changes to the island after the previous big eruption in July 2000.

``Wet ash made the surface slippery and restricted access. When it dried the surface was like deep powder snow. The main crater had been relocated into a new indent 150 metres across. Cleaning ash from gear, including the boat, was our constant chore.’’

DDespite the risks, White Island tours, offering the rare opportunity to walk on an active volcano, have been in great demand.  Prior to December 9, 2019, no-one had suffered serious injury during guided visits.

We walked on the island for two hours, ending at the remnants of the Crater Bay sulphur factory. It exists as an involuntary laboratory to observe the corrosive ability of the island’s gases. A Fordson tractor has all but disintegrated, but its bald rubber tyres were intact. Sulphur mining ceased permanently in 1933. The resulting fertiliser was said to be ineffective anyway. It burned the soil. Throughout the stay on Whakaari I felt remarkably safe and well guided. 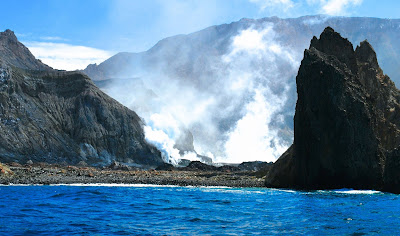 
Posted by Journeys with Roy at 19:36 No comments: