Pint-sized railway
I recall a newspaper photo of long ago. A boy of about my age at the time and his father were standing beside a small steam locomotive. Photo was captioned, ``I won’t have to wait so long to drive this one.’’
Photo was taken at the Romney, Hythe and Dymchurch Railway (RH&DR) in Kent on England’s south east coast. Having seen it, I was determined to find out more about it and visit the railway myself. This I did, albeit many years later in October, 1995.
The railway is 15-inch (381 mm) gauge. It is billed as the ``world’s smallest public railway.’’ It is a public railway owing to having a contract to take students to school.
Locomotives are about one-third size of prototypes. They carry improbable names; Samson, Hercules, Hurricane and Typhoon. Most were built during the late 1920s.
John Snell had been managing director for about 27 years.  He was born in Fiji in 1932 and grew up in New Zealand. He went to school in New Zealand. He acquired his railway interest in my country.
He called on me when I was working on the Press in Christchurch. He struck me as the archetypal English gentleman.
I told him I wanted to interview him for a story; ``but not here. I will visit you in England.’’
That happened about one year later;
Meeting John Snell in New Romney was a delight. Like a Gulliver amongst the small locomotives, he was wearing a permanent smile. He strode through his railway kingdom knowing he could offer the train ride of a lifetime. I was invited to join him in his bar car on the rear of a train. Loco No.1, Green Goddess, was ready to take us on the 20 km tour of RH&DR. 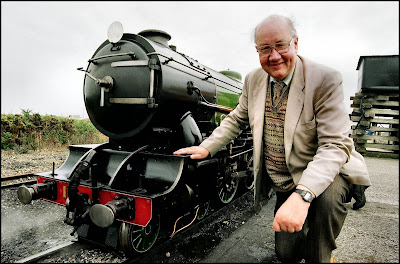 The RH&DR is a splendid reminder of the more eccentric side of the British character. Our 14-total train was loaded with 240 passengers.  Our carriage was compact but big enough to sit inside. Drinks from the central bar were passed from one passenger to another.

Although small, this was no toy. RH&DR recreates all the joy and atmosphere of a full-sized steam-powered railway. The Latin motto on the side of carriages ``Multum in Parvo'' translates ``Much in little.''
``Like me, John told me, ``this railway had its origins in the Antipodes. It was built in the 1920s by a very rich man, Captain J.E.P. Howey. During the 19th century an ancestor of Howey curiously purchased some waste land beside the Yarra River in Australia.
``Later, the same land became the centre of Melbourne and worth a lot of money. Melbourne still has a `Howey Place.

``So the story goes, Captain Howey was a speed fanatic. During the early 1920s he drove a racing car, a 7-litre Leyland Eight. He gave up racing when his elderly mother disapproved. All his energies then went into building this railway.''

Howey converted a Rolls Royce Silver Ghost to run on the RH&DR where he attained speeds up to 60mph (about 100km/hr). On one occasion he recklessly set a station on fire when it was no longer needed.

``Eccentric'' is rather a strong word to describe Captain Howey, said John Snell. ``He was certainly not quite like most people.

``Howey owned several million pounds. Each of the RH&DR steam locomotives cost him about the same as a Rolls Royce motor car.

``He was one of the old school of Englishman. A rather special kind. You had to get onto his wavelength to realise he was quite a reasonable bloke.

``Owning quite a slice of meant he got used to being in the . That made quite a difference to him, as it did to me.''

We arrived at Dungeness, close to the Strait of Dover. A cheerless place overlooked by a nuclear power station. Houses sat on the shingle beach. Many started off as old railway carriages from the former Southern Railway. Inhabitants were mostly fishermen.

John Snell says Dungeness means basically ``old nest''. He laughed and told me to work the ``Dung'' part out for myself.

From Dungeness the railway followed a balloon loop and returned to New Romney. John Snell talked about being able to build carriages large enough to sit in.

``You can build, as you do in , much wider than the track gauge. On the RH&DR we go up to three times the gauge.''

John Snell spent about four years with British Rail until he realised what Dr Beeching was really up to. Then he was offered the RH&DR job over lunch in a London hotel. ``That's always the best way to be offered a job.

``The RH&DR had just changed hands for a second time, having almost faced closure. Captain Howey died in 1963. With no-one in the family with any interest, the railway passed to two businessmen who thought they could make money.

``It was rescued by a group led by Sir William McAlpine who also owned Flying Scotsman. By that stage the railway was somewhat run down. We have built it up considerably over the years.''

Beyond New Romney the railway is double track. Here we enjoyed the thrill of two trains passing with a combined speed of more than 70km/hr. At Dymchurch we walked across the tracks to join a train returning to New Romney. It was hauled by Typhoon. 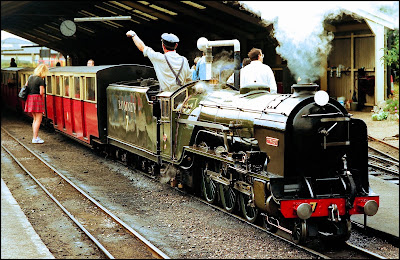 ``We are financially successful but we would like to do better,'' John Snell said.

``Working for the RH&DR, you can achieve something. It's not like struggling away in the morass of what used to be British Rail. Nothing you did there would ever make a difference.

``Life is reassuring on the RH&DR. The pompous little engines are a reminder that, in an ever changing world, a sense of humour is an essential part of the survival kit,'' he said. 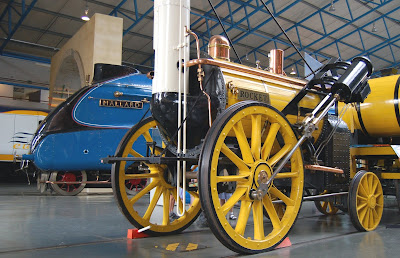 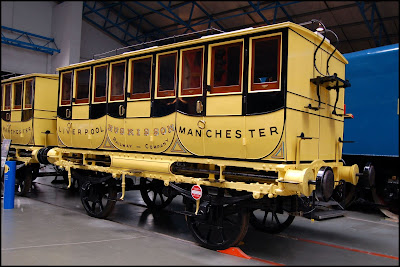 Posted by Journeys with Roy at 16:27 No comments:

Railway Reminiscing- 1
Elsewhere I penned how photography became the preferred expression of my railway fascination. I have been thinking about that while contributing to FB pages, NZ Rail photography and NZ Rail Geography. For some years my railway interest was on the back burner while I took on a craze for mega bicycle travel in several countries. Photography, however, remained a common activity across all interests.
Apart from owning a succession of wonderful cameras, a prized early possession was the booklet of New Zealand Railway timetables. It was purchased from a railway station for the princely sum of One shilling. 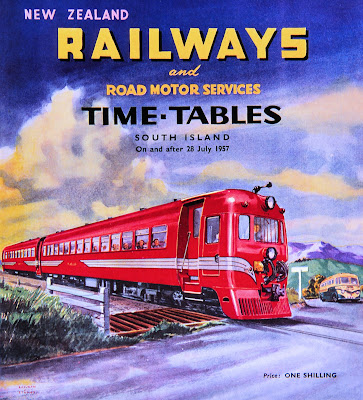 Prior to having access to a motor car, I had to get to railway locations. I could bike to Christchurch railway station. An option was to take the 10 am Greymouth railcar as far as Springfield, arriving at 11.16 am. I could get a shot of the railcar departing, hopefully with a Torlesse mountains backdrop. Soon after a west-bound goods followed. It was typically Kb-hauled. 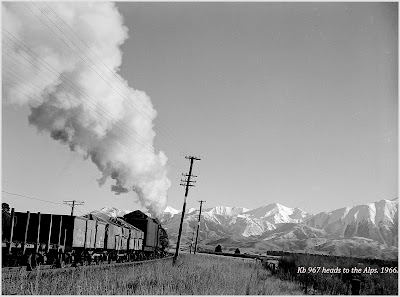 Then it was a matter of amusing myself to be ready to catch the afternoon Christchurch-bound railcar at 2.20 pm. That was during the early 1960s. I recall wandering along the line as far as the Kowai viaduct. The new viaduct was completed. Beside it was the remains of the original bridge which lost its central span in a flood on April 22, 1951. 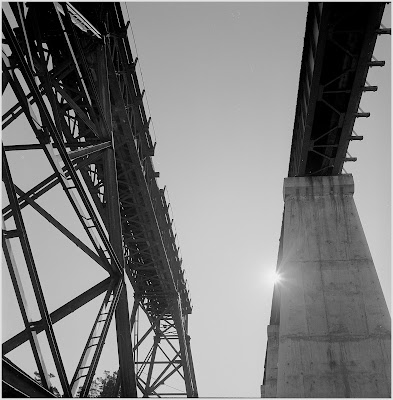 I would be home by 5 pm in time for the evening meal.
Another, weekend option, was taking the Greymouth railcar to Arthurs Pass where I stayed in the YHA. I would spend the rest of the day close to the railway to catch activity involving the Kb. class steam locos and Eo. class electrics. 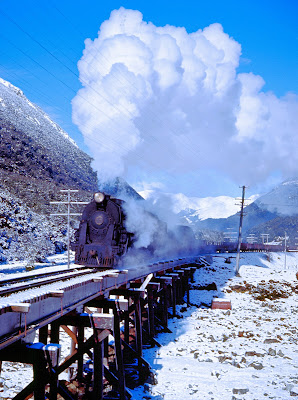 Not much happened on Sunday so I went walking in the mountains. About 8 pm on Sunday evening I got the railcar to Christchurch, arriving about 11pm. I rarely relished riding my bike home so late at night, especially if I had dozed on the railcar.
Arthurs Pass is responsible for my railway passion. My father belonged to the Canterbury Mountaineering Club. So most holidays prior to him getting his first motor car were at Arthurs Pass. We got there aboard the West Coast express departing at 9.50 am. Our never complaining mother carried everything essential for the family of four in improvised carriers. One container had been an unlikely oval hat box. Our father had a back pack, a souvenir from WW2. We always had a cottage to stay in. It would have been built for those working on building the Otira rail tunnel. One cottage was ``Gaya.’’ Formally the tunnel engineer’s dwelling, it was occupied by a colourful Scotsman, Charles Warden.
If we needed assistance getting to our accommodation from the railway station, there was local taxi driver, Jack Suiter. He had two veteran Rolls Royce taxis. He drove at break-neck speeds on the shingle roads. 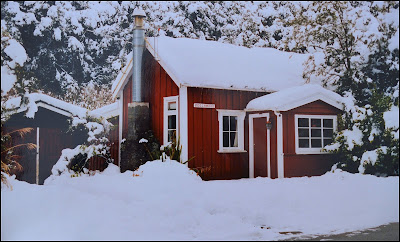 Hence, my passion for railways and the Alpine environment never looked backwards. Later, I enjoyed travel in countries that thrived on railways and Alpine environments. An obvious choice was Switzerland.  I dubbed Switzerland as an ``Arthurs Pass on steroids.’’
Back to my early teenage years. I found companions with the railway photography bug. Some had transport. We would drive to Kowai Bush just beyond Springfield and walk about 5 km. to the 37 metre-high Pattersons Creek viaduct. One tunnel on the line could be walked around.
At the viaduct, we waited for the Greymouth-bound railcar to cross. We knew it would then be safe to walk across the viaduct and await the following west-bound goods train. A small hill on the far side offered an interrupted view of the viaduct. Often the locomotive crew would spot us and made themselves visible in our photographs. 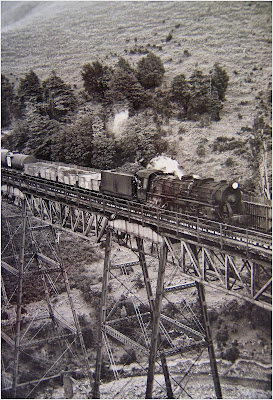 We might later get an east bound goods, and then walk back to Kowai Bush. One time an expected Kb was replaced by a pair of diesels, Dgs. We debated if we were disappointed or not. We concluded we were fortunate in photographing locos belonging to the future. Yarning was part of the rewards. We were young people with a curiosity for a wealth of subjects. In time girls would be part of the discussion even if they were to lead to personal derailments, figuratively and literally. 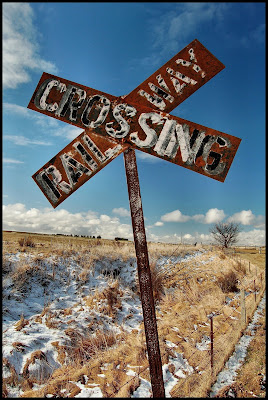 Posted by Journeys with Roy at 15:09 No comments: