Now when it rains
Now when it Rains is a writer’s memoir by Jeffrey Paparoa Holman.
Holman tells us ``Memoir is a perilous Journey, where the writer is the subject and the subject is the writer.’’ I am drawn to this book having read Holman’s earlier work, The lost pilot. The story is about his journey through Japan in a brave effort to trace relatives of a Kamikaze pilot who was shot down when attacking a ship his father was aboard during the later days of WW2.
As with the earlier work, Now when it rains is a page turner. Born in the UK, he arrives in New Zealand in 1950 with his Grandmother and mother. Initially living in Auckland where his Navy-rating father had arrived the previous year, the family eventually settles on the South Island West Coast, in small settlements including Blackball close to Greymouth. 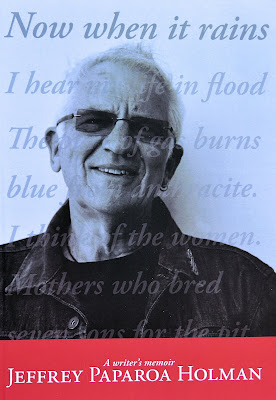 Despite being a brighter student at school, he leaves at a young age owing to a disagreement over courses he would take. He admits pride dictates his next move. So, aged 15, he is introduced to the rigours of working in a sawmill. He later becomes a shearing shed hand on the West Coast and the lower North Island. His father is an unrepentant drunk and it is likely Holman’s early employment that led him to alcoholism. He amusingly writes about a less than sober driver of a D9 bulldozer negotiating a path all too close to a corrugated iron sawmill. One of Jeffrey’s jobs is a skddie, someone who strips logs of stones and other obstructions that might foul a saw blade.
Throughout, he has an ambition to become a writer, a poet in particular. He falls in in with like minded people including poet James K. Baxter. Through these groups, discussing everything from atheism to Zen Buddhism, he is introduced to drugs, a problem he has to deal with along with alcoholism. He finds employment in mental institutions which were anything but fun jobs. We are introduced to his romances including his first wife who tragically dies in a road crash somewhere between Greymouth and Christchurch. Along with travelling a long road to recovery from drug addiction, the author has to come to terms with an aggressive father. A trip to the UK has him employed once again in a mental institution. It is the only occupation he has qualifications for, albeit only vaguely. Luckily it does not go well. Salvation is when he applies to work in a Waterstones Charing Cross bookshop. The bookshop enables him to enhance his passion for books and writing while introducing him to worthy authors, some of whom he tracks down during travels. This employment also contributes to his recovery from drug addiction.  Over cups of coffee with Jeffrey, we discover many things in common. We had both been employed on the Press newspapers. He was a reader and I was a reporter. We had also been drawn to the same travel Destinations, including Japan, the Czech Republic and Dresden. We were also both published authors.  And we both get around on bicycles. I did not quite share his enthusiasm for Bob Dylan.
While his UK bookshop employment is going famously, he feels his real home is New Zealand. His family support him returning. Curiously he has to apply for a New Zealand passport along with New Zealand citizenship even though he had previously been living in New Zealand for several years. In 1950 he was able to travel to New Zealand on his mother’s passport.  Prior to going to try his luck in the UK, he had been working on s degree at the University of Canterbury. On his return to Christchurch he discovers he can take up at Canterbury where he left off. He graduates and through an Anglican Maori Mission discovers an interest in Maori culture and language. Various holiday jobs include a stint on a Christchurch rubbish truck. Studies continue with Jeffrey attaining a doctorate. Several collections of his poems are successfully published. He decides to add a middle name to Jeffrey Holman. His choice of ``Paparoa’’ reflects his Maori interests along with the West Coast environment where he grows up and eventually returns to. These days Jeffrey continues to write and travel. He is a born storyteller with ample stories to tell. Now when it rains –the title of one of his poems, is available from selected bookshops including Scorpio in Christchurch. Jeffrey told me his present wife, Jeanette, read each chapter as it was finished. And she was always waiting to read the next. The memoir is also a commendable account of l970s life in New Zealand. 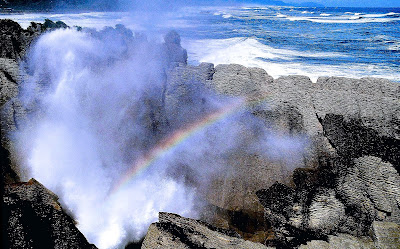 
Posted by Journeys with Roy at 21:04 No comments: