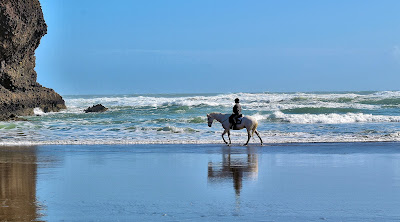 I prefer to exchange the tangled chaos of cities for the agreeable chaos of nature. In Auckland I head west to the forest-covered Waitakeres and boisterous western coastlines beyond. Much of the best of it is within Karekare and associated Piha. All about 45 km from Auckland CBD. It is a rugged region of wild, treacherous seas, weather-sculptured headland cliffs, and waterfalls amongst lush nikau palms.
Little surprise then, the beaches have provided locations for movies, arguably the best of them being Jane Campion’s 1993 drama, The Piano. It stars a moody Sam Neil contrasting with an aspiring Anna Penguin. 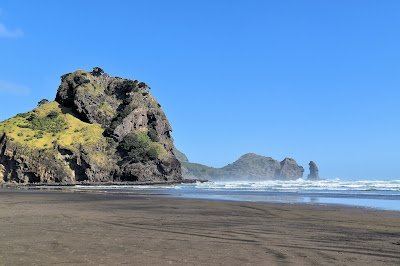 More recently Piha’s unpredictable surf pounding cliffs and iron sands has provided the location for Television New Zealand’s long-running reality series, Piha Rescue. Filmed from 2001, story lines are based on activities of Piha Surf Lifesaving Club which has been guardian of the iron sand beach for 75 years. Sold around the world with varying titles, the last of the series ran this year.
Another guardian of the iron sands is the crouching 101 metre-high Lion Rock offering an opportunity to scramble partway up on a formed track for a bird’s eye view.  Occasionally people have wandered off the track and become hapless victims of another version of a Piha rescue.
It is the waves dividing on Lion Rock that inspired the Maori name Te Piha meaning,`` the ripple of waves at the prow of a canoe.’’ 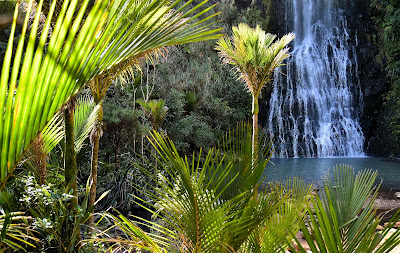 A Karekare gem are the 30 metre-high falls of the same name, reached on a short easily-graded track from the beach-front carpark. For a diehard South Islander brought up to enjoy a spectacular southern landscape, these falls nevertheless have great appeal. Suspect I am impressed by the play of light through lush nikau palms (Phopalostylis Sapida) providing an amphitheatre for a pool popular for swimming at the foot of the falls. The nikau species, the world’s most southern palm, is endemic to mainland New Zealand.  Nikau provide a canny sub-tropical look to these coastal landscapes. Other prominent natives are the ubiquitous tree ferns and cabbage tree/Ti-kouka along with the spectacular scarlet pohutukawa, known in summer, as the New Zealand Christmas tree.
Closer to the beach I discover a Maori carving and associated information panel, Wai Karekare. The popularity of the coastline ensured pas to inhabit and protect local Maori.


These days dwellings represent the quaint age-old Kiwi bach. In nearby Piha, the humble Kiwi holiday home is increasingly being up scaled to sophisticated dwellings. 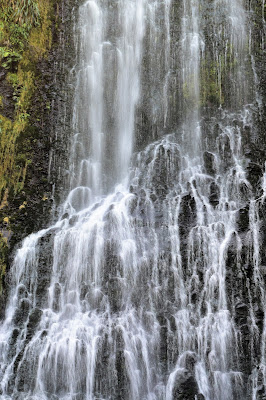 Posted by Journeys with Roy at 15:24 No comments: 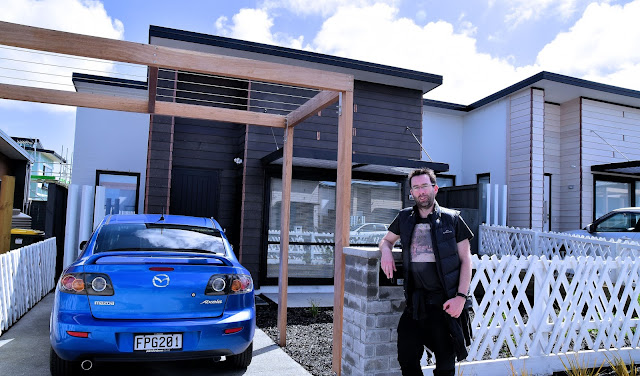 I have been to Hobsonville to check out the new home of Paul, my oldest son.
Paul recently shifted into a newly-built three bedroom apartment in Grey Warbler Road.  Hobsonville Point is about 40 km west of the Auckland CBD. Non-peak travelling time is about 25 minutes.
It is an appealing new town sited on a former RNZAF Base and jutting into the upper Waitemata Harbour. It is believed to be named after New Zealand’s first governor, William Hobson. Streets and contemporary features are named after birds, fish, and one-time military sites. Quirky decorative street features include bird-feeding boxes. Buildings comply to a colour scheme. 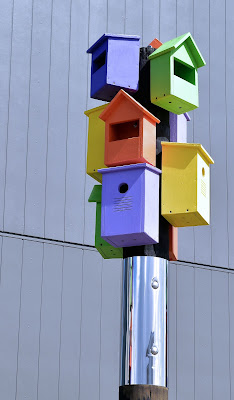 The air base had its origins in 1924 when land was put aside for sea and land-based aviation. Hobsonville maintained TEAL (former name of Air New Zealand) flying boats until they were retired in 1967. The Air Force relocated to nearby Whenuapai in 2001 and 167 ha were rezoned to become a compact town. 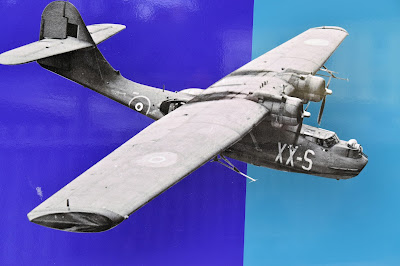 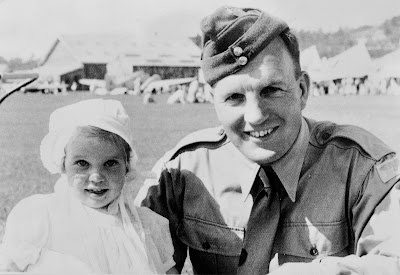 Presently Hobsonville Point has 3000 residents. More than 1600 dwellings have e been sold. Average price is $730,000. 11,000 dwellings are expected to be completed by 2023.
Recreation has been included with several ks of walking and cycling tracks around the point.  Catalina Bay, named after a twin-engine amphibious flying boat, is a community hub with transport, farmer’s market and other facilities. The ferry wharf has displays depicting local history along with notes on wildlife. Hobsonville Point was originally favoured with kauri forests. Hobsonville ventures in the planning include development of over-water dining in Catalina Bay. Already, schools, parks and sophisticated playgrounds are providing the necessary infrastructure for families. 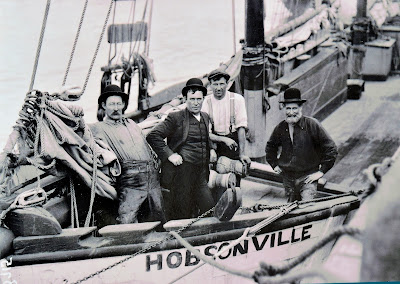 For myself, I approve of a town of modern design cosy structures in a location with a get-away-from-it -all atmosphere. Another plus is Hudsonville’s proximity to the generously-forested Waitakere hills and their associated impressively-wild western coastline. 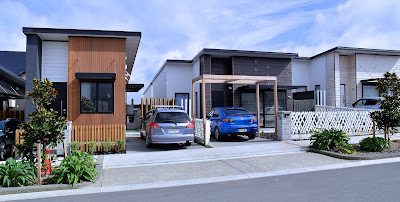 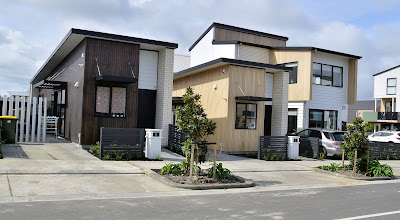 Posted by Journeys with Roy at 20:31 No comments: