Iceland 2 –Identifying Landmarks
Iceland is the result of 64 million years of continual transformation and rebirth. It has been shaped by the unpredictable antics of volcanoes, glaciers and earthquakes.
Iceland precariously sits astride two opposing tectonic plates. The island expands at a similar rate as its coastline erosion.
I gleaned these facts, and others, from Perlan Wonders of Iceland exhibition setup in an extensive complex overlooking the capital, Reykjavik. Amongst the extensive exhibitions over four levels is an ice cave made from glacier ice. 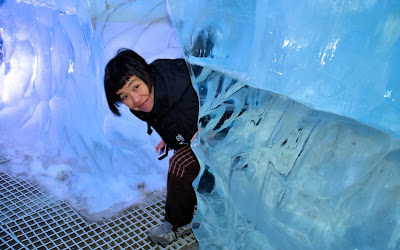 The top floor is appropriately a revolving café/restaurant. Glancing through the facts of Iceland I could not help thinking they could have been referring to New Zealand.
Wonders of Iceland was a great experience but did not quite match the excitement of venturing to the real thing. Our experience included joining two guided day tours; one with Gray Line and the other with Reykjavik Excursions. Both were excellent. Guides were informative.
Gray Line treated us to the Golden Circle highlights to the east of the capital. A history lesson was at Bingvellir where we could walk through a cleft formed by an active fault line. It is claimed this wild site was where the Icelandic State was born during Viking times. Curiously, that inaugural so-called `first parliament’ agreed to introduce Christianity to Iceland. During the proceedings the ground violently shook with an earthquake. Participants questioned whether the idea of Christianity had upset their traditional Norse gods? Those present stuck with the Christianity decision. These days Icelanders are typically staunch Lutherans.
The first scenic blockbuster was Gullfoss Gorge where we were let loose to explore the furious waterfalls. In appearance Gullfoss was a threatening dramatic environment.
Gullfoss Gorge has been a Nature Reserve since 1979. It was formed when a flash flood in the Hvita River forced its torrent through cracks in basalt lava layers. The usual flow is 109 cu metres/second. It has reached 2000 cu metres /sec.
Paths and protective fencing allow for close viewing.  The challenge was to keep my camera lens dry from continuous fine spray. 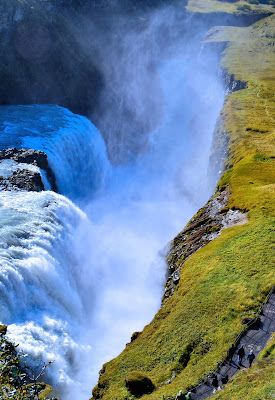 I was amused to discover a love story associated with Gullfoss:
``No-one can cross the Hvita River upstream from the waterfall, even on horseback.  A seventeen century story relates to the son of a Brattholt farmer who looked after sheep in pastures upstream. Across the gorge a saucy girl from Hamursholt also looked after sheep. They noticed each other, and kept an eye on each other –the swift Hvita between them. A fondness blossomed. Eventually, the girl pleaded with him to come across.  He found the shallowest place, and set out to wade the torrent. It must have been a harrowing experience for the girl to watch but he made it to her. How he was greeted is, sadly, not recorded. We are told they married and had many well-respected descendants.’’

Next stop was at Geysir (Icelandic spelling for geyser) to experience the thermal reserve and the active geyser, Strokkur. It curiously formed a large dome on the holding lake through which, moments later, the geyser blasted. Iceland is one of five countries with active geysers. New Zealand is among the others. 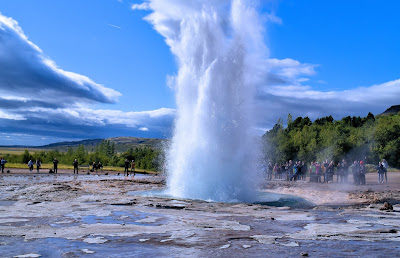 Reykjavik Excursions took us to the south coast. We paused to see the Eyjafjallajokull ice cap volcano. It infamously awakened from dormancy on April 14, 2010.  The eruption was relatively small as far as volcanic events go. Nevertheless a plume of ash 250 cubic metres across rose to nine km. The ash cloud drifted south-wards across Europe disrupting air traffic.  10 million travellers were compromised. Reporters around the world struggling with pronouncing the name Eyjafjallajokull caused a perverse sense of pride amongst Icelanders. 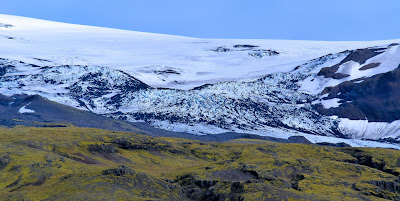 Nearby we walked to the Myrdalsjokull Glacier which sits on the larger volcano, Katla. Katla has erupted about 20 times since Iceland was settled. The last occasion was in 1918. Volcanoes erupting beneath glaciers cause tremendous ice melting. Flash floods rising within a few hours can be 100, 000 to 3000,000 Cu metres/sec. Myrdalsjokull is Iceland’s fourth largest glacier and the most southern. Icebergs in the glacier’s terminal melt lake are tarnished with black ash. The same volcanic ash formed black sands along the nearby coastline. 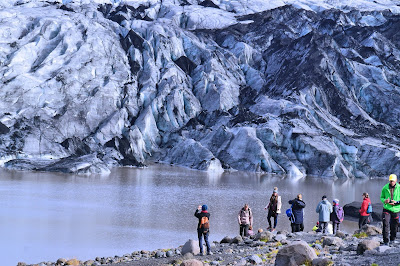 Our day included several waterfall experiences, one (Seljalandsfoss) we could precariously walk behind. I made the dripping experience with some difficulty. On a final steep pinch a welcome strong hand gave a reassuring shove from behind.

We have stunning waterfalls in New Zealand but those in Iceland are enhanced by incredible volumes of water. Skogafoss, one of Iceland’s largest, tumbles 62 metres from a plateau. It is 25 metres wide. One looking for a thrilling, albeit wetting, experience can walk a short distance up the Skoga River to the base of the falls.  The mist spray ensures a rainbow when the sun shines. We enjoyed a close encounter with Skogafoss. The miracle is we were not all drowned. Legend has it that behind the waterfall one can find treasure. A chest filled with gold and other treasures was hidden there by Þrasi Þórólfsson, a Viking Settler at Skógar (Eystriskógar) around 900. It is yet to be found. 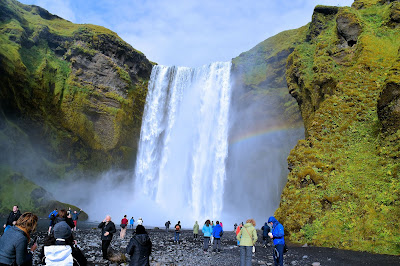 Posted by Journeys with Roy at 17:12 No comments:

Iceland 1 – unsung foodies’ paradise.
Iceland has many things in common with New Zealand. This is amazing considering in many aspects Iceland is New Zealand’s opposite.
When I visited the mid-Atlantic island in September this year the time difference was exactly 12 hours. Iceland’s population in 2018 stands at 350,000. This compares with 388,000 in Christchurch, New Zealand’s second most populated city. Iceland’s land area is 103,000 sq. km. Little wonder, then, some maps label the country ``Island.’’ 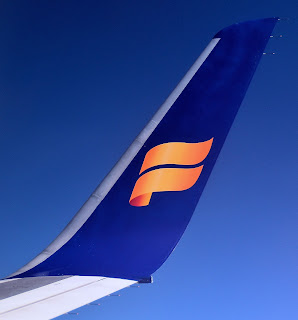 Iceland’s prime minister, since November 2017 is 42-year-old Katrin Jacobsdottir She is Iceland’s second woman PM. In photographs she looks remarkably like our slightly younger Jacinda Ardern.
Iceland is popular for its spectacular natural features – volcanoes, waterfalls and even active geysers.  (Geysirs is the Icelandic spelling.)
I ask myself why go to the other side of the world to see the ``same as?’’ Well, I do enjoy spectacular natural landscapes. I am not a city person.
So Iceland was definitely my cup of tea as a travel destination. Mention of a cup of tea reminds me of the first question asked of unusual holiday destinations.
``What was the food like?’’
Iceland is an unsung foodies’ paradise. And it is the unusual, bizarre even, that frequently makes it interesting. I refused to eat puffin bird dishes offered at Reykjavik’s downtown Geysir Restaurant but I did agree to a whale sashimi entrée. It was my Japanese companion’s choice. Haruko is an employee in a sushi shop chain in Christchurch. Hence her curiosity. Sashimi is typically expertly cut raw fish. In this case the whale meat was lightly grilled. It was garnished with the usual sashimi trimmings of wasabi, ginger and soy sauce. I admit it was very good indeed or as my companion said, ``Roy san, oishi desu.’’ 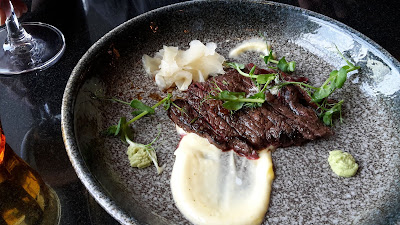 As elsewhere where whales are hunted, whaling in Iceland is controversial. Whale is not significant in the Icelandic diet. Tourists cop the blame (arguably unfairly) from the International Whaling Commission for Iceland continuing hunting Minke whales. Tourist demand for whale is, however, declining.

We spent a couple of excellent days in Grundarfjorour (pop. 850), a delightful fishing village on the Snaefellsnes Peninsula west coast. The village was founded in 1786 by the Danish king. It soon became popular with French fishermen (1800-1860) who profited from the excellent harbour. The French arrivals established their fishing operation and built a church and hospital. When they eventually departed, the French people dismantled their buildings and even exhumed their dead, taking their remains to France.
We discovered a lobster and seafood pizza to die for in Laki café near the fishing port. Curiously, the woman proprietor chatting to other staff near our table did not appear to converse in Icelandic. She sensed something different about me also. She had spotted the New Zealand patch on my jacket.
``Where are you from,’’ she asked.
``Christchurch,’’ I replied.
``Me too, she smiled. ``I lived in Riccarton. When travelling in Europe I met an Iceland guy and have been here in Grundarfjorour for 30 years.’’ She did know about the Christchurch earthquakes of 2010 and 2011.
Laki café is part of an adventure tourism and whale watching business. 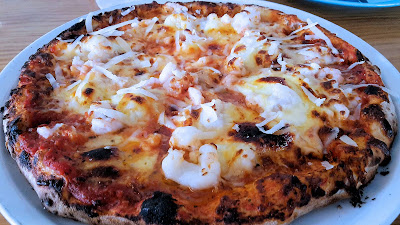 Our well-appointed International Hostelling apartments were overlooked by one of Iceland’s most photographed mountains. Kirkjufell (Church Mountain). Merely 463 m high and rising from the fjord it is certainly distinctive. Kirkjufell Identifies Grundarfjorour village. It is so named owing to its steeple appearance, a sharpened top and curved sides. But it depends on the angle viewed. It is also called a witch’s hat or scoop of ice cream. Close by we dined at Bjargarsteinn House of Food Mathús restaurant in a quaint, old building on the seaside. It is sometimes claimed as the best dining experience in Iceland The century-old very Scandinavian building existed elsewhere and was relocated 70 km. to its present location. The restaurant opened in 2005. We experienced excellent service in a warm environment with a magnificent view of Mt. Kirkjufell and the beautiful fjord of Grundarfjörður. The restaurant is a family-run business led by the professional experienced chef, Gunnar Garðarson. The inspiring menu changes according to the season and the chef's choice. My companion chose fish of the day while I went for a lamb dish, lamb being essential to the customary Icelandic diet. Excellent wine was either French or Italian.
The standout was the entrée, an interesting assembly of smoked lamb, dried cod and small cubes appearing like cheese. It definitely was not cheese. It was fermented shark, Hákarl, a traditional Iceland dish.  It is Greenland or other sleeper shark that has been hung out to dry for some months. Its ammonia aroma gives rise to the unfortunate myth it has been buried and urinated on. 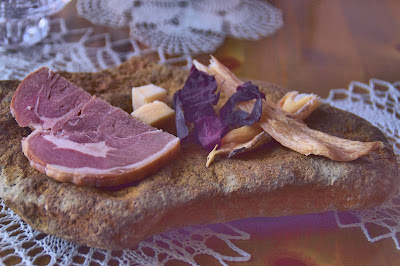 House of Food entree- served on a beach stone

Fermented shark is an acquired taste, more likely to be savoured by devotees of strong cheese.  While challenging my taste buds, my eyes are attracted to the magnificent mountain framed by our table’s window. The sun is setting and red streaks flow above Kirkjufell. We have wonderful mountains in New Zealand but I have never seen anything quite like this. Grabbing my camera I excuse myself in hope of a perfect image. 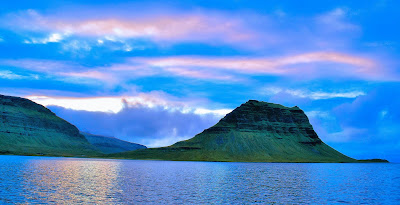 
Posted by Journeys with Roy at 14:37 No comments: