Art in the forest
A ditty we sang as kids went;
``If you go down to the woods today
you’re sure of a big surprise.
If you go down to the woods today
you’d better go in disguise’’
It was, of course, The Teddy Bears’ Picnic. The lyrics were written in 1932 by songwriter, Jimmy Kennedy. The lyrics take on a new significance if one goes down to the woods in Hanmer Forest. A series of creatures and critters are found along the one-kilometre Forest Amble walk.  They are the work of Andrew Lyons of Heathcotte Valley in Christchurch. Lyons describes himself as a ``shape maker’’ rather than an artist or sculpture. His forest Images are realistic. 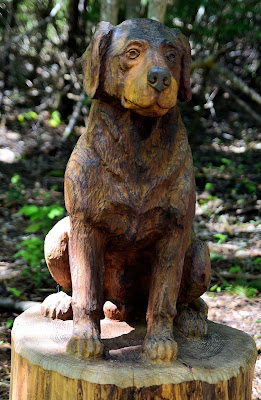 They include a Labrador dog that sends real dogs into a barking frenzy, a giant falcon, tree huger extraordinary, tree-climbing possums and a fantail. 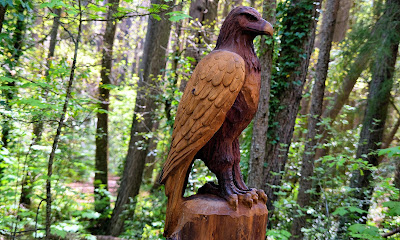 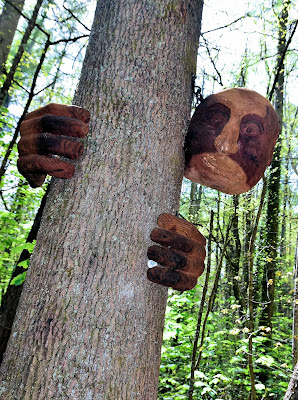 Lyons carved his images from a giant redwood necessarily removed from the Hanmer Springs thermal pools complex. The tree was taken over by the Hanmer Heritage Forest Trust. Funding was sourced from Pub Charity and the project was supported by stakeholders, Ngai Tahu and Rayonier
Matariki Forests. 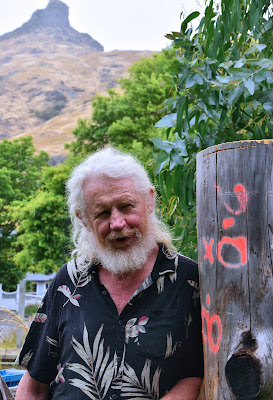 Lyons ably used the redwood’s natural colours and grain to enhance his creations. ``Forest Amble’’ describes the walk perfectly. It is ideal for all ages and families. The trail meanders amongst a variety of pine trees, European alder, Norway spruce, European larch (delightful in
autumn) and macrocarpa. Much of the forest was planted during the early 1900s as experimental trials. Hanmer Heritage Forest is protected under a Crown Covenant to preserve its special character. Hanmer Heritage Forest Trust also ensures public access to the woods.
The circular Forest Amble walk takes about 30 minutes to complete. It is likely to take longer when pausing to appreciate the work of Andrew Lyons. He has included several sculptured mushrooms that are ideal to sit upon when resting. The final sculpture is a striking fantail. Many people miss this one. 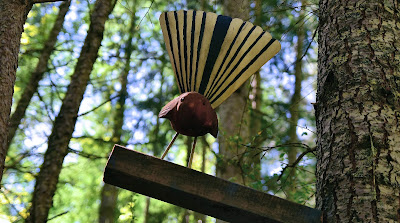 A chorus from abundant bird life provides a pleasing accompaniment while walking or resting. Forest Amble and connecting trails are also poplar with mountain bikers. Andrew Lyons has had many jobs –from a postie to TVNZ set builder. He describes himself as ``a fiddler.’’ He needs to be creative.   When younger (he is in his late 60s) he would walk through Banks Peninsula sourcing fallen trees. Beach driftwood is also sought as raw materials. He says he would never cut down a living tree.


Posted by Journeys with Roy at 16:36 No comments:

Tragedy commemorated on Oamaru plaque
Continuing from my previous blog, Oamaru is a rewarding place to photograph. The small north Otago city is identified by neatly preserved historic buildings. It is known as ``Whitestone City’’ owing to the limestone building materials quarried in nearby hills. More recently, Oamaru has become the ``Steampunk’’ capital. And not so far away is a beach strewn with the famed Moeraki Boulders.
A plaque beside the railway near the Oamaru Botanic Gardens has frequently caught my attention. It commemorates an 11-year-old girl, Norma Anne Kearns, who was killed by a southbound express train while trying to save her dog. The tragedy happened on 22 December 1950.
The plaque was erected by the Animal Lovers and Protection Society. 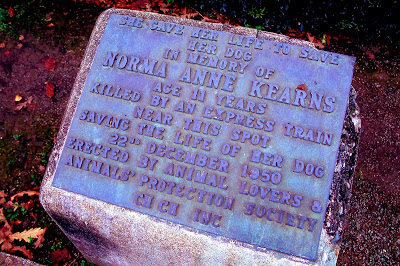 In an effort to find out more, I posted a photo of the plaque on New Zealand Railway Geography Facebook page. John Clark kindly responded with a link to a story in the Oamaru Mail on 23 December. Apparently, Norma Kearns had just arrived in Oamaru from Invercargill for a holiday with a family friend, Mrs E. S. Miller of 15 Hull Street. . She was accompanied by her parents. Norma took her family’s dog for a run about 4 p.m. At the Severn Street railway crossing, the dog sat in the middle of the railway track. Unaware of the approaching train, Norma went to remove her dog from the railway line. She saved her dog but not herself. The locomotive struck Norma throwing her clear of the railway. Doctors were quickly on the scene but Norma’s injuries were fatal. She died within a few minutes. In the meantime her mother was worried when her daughter did not return for tea. It was 8.30 p.m. when a neighbour advised Mrs Kearns of the tragedy. Norma’s father identified his deceased daughter and, next morning, attended an inquest.
I have always enjoyed discovering railway details. Some, as with this plaque, can be disturbingly poignant. 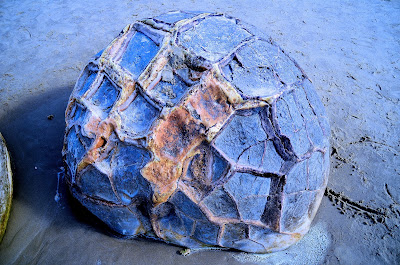 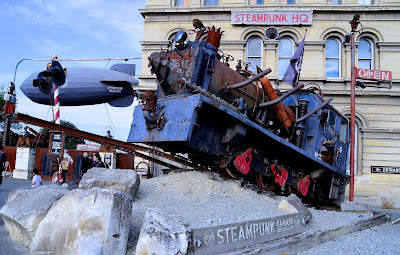 Posted by Journeys with Roy at 13:48 No comments:

This past weekend was the Christchurch Model Train show. This year, about the 30th event, I did not return home empty handed. I had bought a train set – a Marklin starter set comprising a small tank loco, two wagons, some track and remote controller. 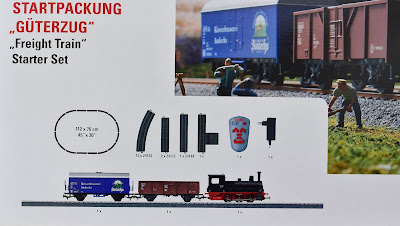 Roy's  new train set
In my youth I had been a railway modelling guru. Those days I could afford little more than a Marklin catalogue. It was great bedtime reading. I settled for a less expensive brand funded by school holiday raspberry picking. It was an eight mile bicycle ride to the Yaldhurst raspberry farm. I was keen. Those days I had a friend of the same age and same railway interest. He was Neil Andrews. 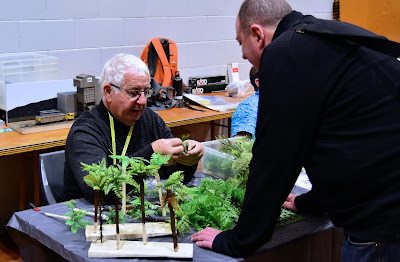 Neil Andrews shows how it is done at the Train Show

One stage we combined our model trains in a layout in his back garden shed. It was great for a while. Then one day, the last day of the 1959 May school holidays, Neil suggested we borrow (without asking) a camera from our respective absent families. I knew where my brother kept his Agfa Clack.
We set off cycling to the Linwood locomotive depot, having first called in at the local chemist to buy a roll of film. Teenage boys typically called into the chemist to buy French Letters. Our purchases did start with ``f’’. Unknown to me, buying that first roll of 120 film was the beginning of a lifelong passion – photography. The film was subsequently returned to the chemist shop for processing.
The eight 6 x 9 cm glossy prints I collected a couple of days later weren’t art pieces by any means. But they were encouraging. I soon began to think. Well model railways were an expression for my big interest in railways. Would photography do that better?  Well, yes, I concluded. The photography fledgling interest took off at a great pace. I got a summer holiday job in a camera store. The cash earned purchased my first 35 mm camera, a Kodak Retinette. Initially the camera was taken to the railway and became necessary kit for train journeys. Other subjects interested. I enjoyed the outdoors and I could photograph my occasional girlfriend. I acquired more cameras and experimented with larger formats. I worked in photo studios and eventually started my own photography business. It was mostly weddings and portraits. Looking back, the amount of toil I did- not just the photography but also the developing and printing. I should have made lots of money. Sadly I was not a gifted business person. Later I started writing, initially as an opportunity to sell photographs for magazines and books. It snowballed until I got my first scribe’s employment –on the Christchurch Press. So that was my life for most of my life. And so enjoyable.
Recently in a moment of weakness I volunteered to join the committee of the Christchurch Big Model Railway Show. I was the only non-railway modeller involved. The great thing about it was meeting up with my friend of many years ago, Neil Andrews. While I had taken on new interests, Neil had stuck to railway modelling. We reminisced about our efforts to follow our railway interest. This mostly involved cycling throughout Canterbury province in search of railway items of interest. Much of our recall had an element of truth. Maybe there was a tad of exaggeration and a lie or three. Most impressive were Neil’s stories following his model train interest throughout America and Europe. He had, for instance, been to all the great model train exhibitions and events in Germany. Amongst it all I mentioned one year I would buy some model train stuff to once again get involved. Another prompt was been elected Patron of the Christchurch Model Railway Club. This was owing to my long time railway interest. So here I am with my first ever Marklin bits and pieces. One of the train show’s long-time trade exhibitors had been Toottoot.co.nz importers of Marklin. Where it will all go from here is anyone’s guess. For a start, the models look great gathering dust on top of the bookcase. 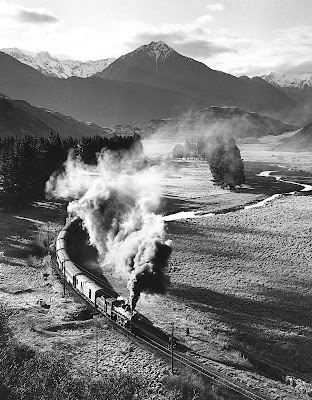 One of Roy's successful photographs of the 1970s 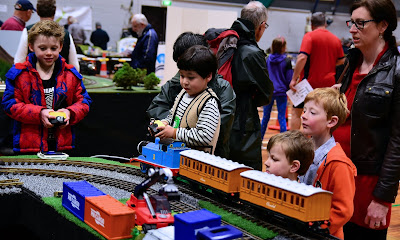 Kids love the model train show. Many kids are in their 70s. 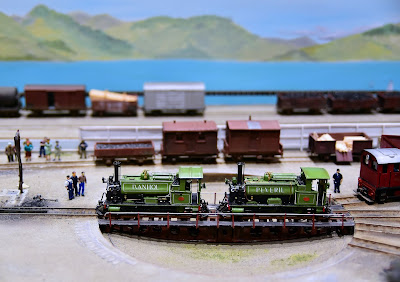 Railway modelling at its best. Scene at Lyttelton in 1963


Posted by Journeys with Roy at 13:59 No comments: