Amused by my tea towel

I had being buying Selaks Reserve Chardonnay and enjoying my daily glass or three. But I inexplicably missed out on a free tea towel offer that came when buying two bottles. I sent an email to Selaks and they kindly sent me one. It’s a beauty using a play on words to present an agreeable line Great Minds Drink Alike. 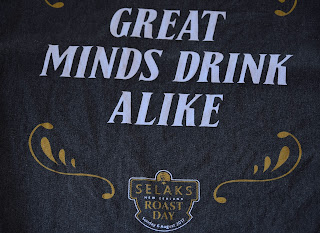 The Selaks wine bottle label is one that typically catches my attention. I was therefore interested to do a little research.
Marino Selaks, aged 24, arrived in New Zealand from Croatia in 1906. Most things about his adopted country were agreeable apart from olive oil and wine not being a part of everyday life. He was used to a bottle of wine being on the dinner table. He bought a market garden, orchards and a winery in Auckland and went to work. With other Selaks’s arriving from Croatia, winemaking became a family business creating the traditional European wine styles. Later Selaks produced New Zealand’s second sparkling wine and exported to Australia. A setback was in 1956 when the government acquired the vineyard for part of the North West motorway. Cabernet Sauvignon had just been planted for the first time.
Alternative land was purchased and more grapes planted, this time 5000 vines of the latest varietals. Land was also purchased in Marlborough, the home for New Zealand’s distinctive Sauvignon Blanc.
Success hinged on decisions of what might work and, in true kiwi style, giving it a go.
An enlightening video can be viewed on www.selaks.co.nz

In the meantime I chuckle over Great Minds Drink Alike.
It’s a rare, pleasant, change to have amusement when drying dishes. 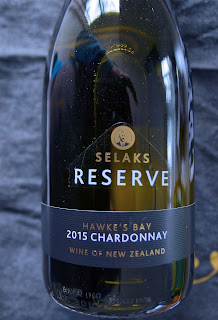 Posted by Journeys with Roy at 21:40 No comments:

Viewing from afar
Putting distance between myself and the city has been my long-time destination choice. As far away as possible. Preferably where mountains rise above inland lakes and native forests.  Circumstances frequently dictate distancing myself has to be a tad more modest. In Christchurch we are lucky. In a short time, even cycling or walking, we can have a vast view of Canterbury simply by ascending the nearby Port Hills. 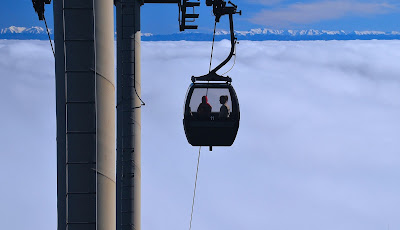 Popular with locals and visitors is the ride up in Christchurch Gondola, actually a cable car, from the Heathcote Valley. In a handful of minutes one is whisked to almost 500 metres astride Mount Cavendish. The cabins travel a 1000 metre-cable to the Top Station.
Views are outstanding. To the west are the Southern Alps foothills and to the north the view is over the sweep of Pegasus Bay to the Kaikoura mountains. On a suitable day paragliders use the gondola summit as a convenient launching point. In another direction the view overlooks Lyttelton Harbour and its busy seaport appearing like an animated miniature train set from this vantage point. 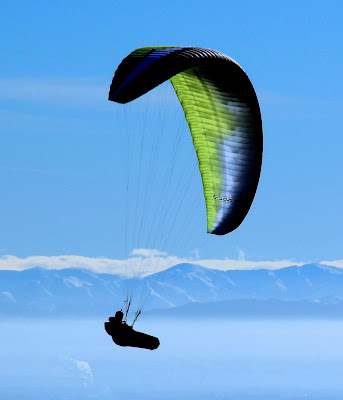 A not-to-be-missed thing to do is to enjoy an hour or so with coffee and add-ons in the Red rock Café.
For a rundown on the café let me introduce you to café manager Vanessa Murphy.
She may surprise, shock even, with her announcement, ``lolly cake is a café speciality.
``And it’s not just the children who eat it,’’ laughs Vanessa.
More to my liking would be a savoury muffin. If tempted by the plush food cabinet a Panini or croissant would do the trick. Vanessa then announces ``the works’’ scone?
That’s a date scone with jam and cream.
She has been Red rock Café manager for 18 months.
Her husband, Dominque, is the chef working a floor or so down.
``In the dungeon,’’ laughs Vanessa.
Everything at Red rock Café is made on site.
A blackboard menu is available from 10 am to 4 pm. It chalks up burgers, fish ‘n chips and other yummy options.
Cabinet food is made fresh to keep pace with demand.
Healthy options include fresh fruit salad and special children’s offerings. 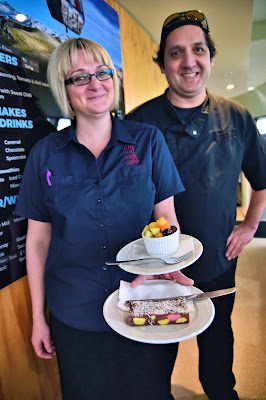 Vanessa and Dominique work together on food selections. Bottom line is, ``what customers want.
``The café is going very well,’’ says Vanessa. We meet a lot of wonderful people. Some arrive having walked the Bridle Path and Crater Rim Walkway.’’
As a working environment, it could not be better.
``The 360 deg. view changes every day. We can be in sunshine when the city is under cloud. Or we can have snow when Christchurch doesn’t.
``This time of year (July and August) we see glorious sunsets by the time the last Gondola descends at 5.30 pm.’’
I ask if she fields any unusual questions.
``We are frequently asked `how do we get to work?’’’ she laughs.
This is my choice of time of the year to visit. It’s when snow generously plasters the mountains.
A two-way cable car ride costs $28 for an adult. A better choice is to purchase an Annual Pass for $65, or $139 for a family.
An annual pass entitles unlimited rides and also includes the same on the Christchurch Tramway. It also offers discounts in the well-stocked gondola shop at the summit and other company attractions.
I’m on my way. 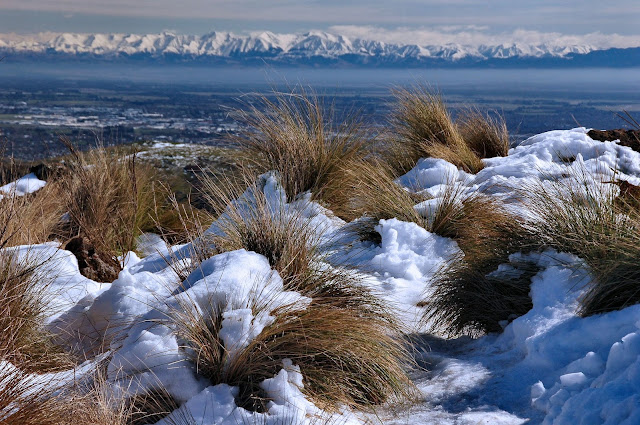 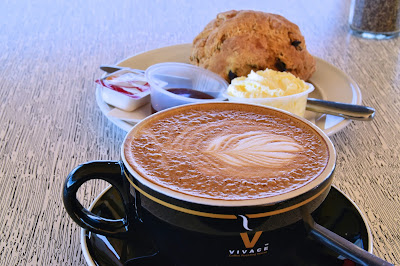 Hands on an an Aussie icon 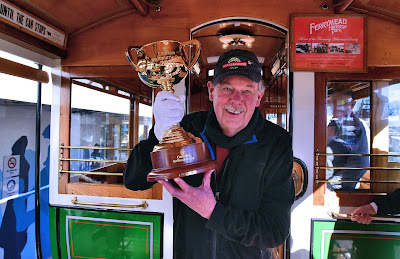 Aussies have been accused of taking over Kiwi treasurers. If so, I can tell you it’s not a one-way street. Right now a great Australian icon is languishing in Kiwiland.
It is understandably a heavy item being 18-carat gold. It is worth $A200, 000.
Having put on a white glove, I was privileged to hold it and have my photo taken. 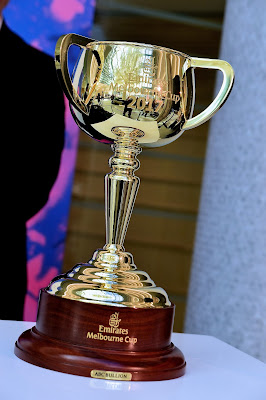 Incredibly, a new Melbourne Cup is manufactured each year. Since 2003 the bright golden cup has toured 31 Australian and New Zealand destinations. Dubbed Emirates Melbourne Cup Tour, this year it started on July 1 in West Wyalong, rural NSW, where gold used by ABC Bullion was mined.
The Cup will return to Flemington in time for the race that stops a nation on the first Tuesday of November.
In Christchurch the Cup along with a small accompanying care group was transported from New Regent Street to Arborista in High Street Mall aboard heritage tramcar No. 152. The event added one more celebrity to the tramcar’s repertoire.
It has carried Queen Elizabeth II and HRH Prince Philip; HRH Prince Harry, the Dutch royal family, and the 2017 Melbourne Cup. 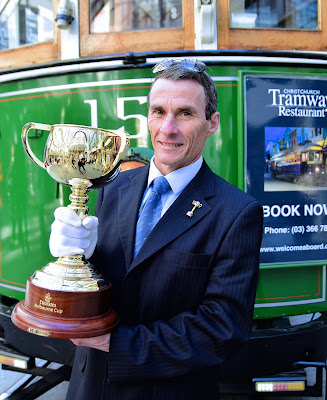 Clutching the cup was racing’s legend jockey, Scott Seamer.(pictured) His first ride was in 1987. Since 2000 his prize money has exceeded A$ 42 million.
Tram driver Ken Henderson asked Seamer what it felt like to presented with such a cup.
``Very good,’’ he replied, ``especially when it is filled with money.’’
Scott Seamer won the 2001 Melbourne Cup aboard Ethereal trained by New Zealander Sheila Laxon, the first woman to coach a Melbourne Cup Winner.
A pleasing touch was the cup being taken to a rest home to visit 93-year-old John Osborne.
``Igot to drink beer from one of those 65 years ago,’’ he said. He had been itching to get his hands on one again. The customary white gloves was a new experience.
Osborne won the Melbourne Cup in 1952 aboard Dalray trained by Clarrie McCarthy.
``Dalray was seen as a winner when we arrived at Flemington. He charged from the back of the pack.   I was cheered by the Aussies as if I was one of their own.’’
I might sound like a racing devotee. Truth is I am not. I have a small interest owing to reading Banjo Paterson verse and a great book by Will Lawson, When Cobb & Co. was King.
Lawson writes about punters arriving on horse-drawn coaches for the trial event in 1860, then the first Melbourne Cup in 1861. It was won by Archer. The 1860s marked the beginning of the demise of horse-drawn transportation in Australia. 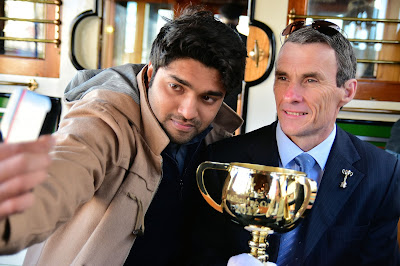 On the first Tuesday in November Kiwis will join their trans-Tasman neighbours in pausing for about three minutes 20 seconds for the call of the Melbourne Cup. In 1993 Kiwi punters spent $9.3 million on the race.
Suspect I will not be betting and may not even tune in to listen to the race.
But when I was asked on Friday if I would like to hold the Melbourne Cup and have my photo taken, I very much appreciated the opportunity.

Posted by Journeys with Roy at 21:19 No comments: