Railway Stations West -1
I admit to fond memories of Springfield railway station. It was a watering stop for steam locomotives when I was a wide-eyed kid off on an adventure.
Refreshment rooms were modelled around the, then, steam locomotive’s need for watering about every 45 miles.
Albeit less important, train passengers might also need refreshments, hence the network of refreshment rooms throughout the railway system.  On a frosty morning I would stamp my juvenile feet on the Springfield station platform to encourage circulation and warmth. One hand would clutch a mug of wonderful railway coffee. The other would clutch a hunk of tasty block cake or ham sandwich. (I later discovered recipes for coffee and block cake were closely guarded secrets).
The view ahead was likely the gloriously snow covered Torlesse range. In the mid-distance the Ja-class loco was at the water tank.
In railcar days, Springfield refreshment rooms became a teaming mass of humanity on both sides of the counter. Staff were frantic making coffee and slicing up block cake. Train passengers jostled in an attempt not to spill coffee over another passenger.
Refreshment stops were limited to 10 minutes. Hence the frenzy. But I never heard of anyone being left behind.
It was all a slice of Kiwi culture until refreshment rooms were closed down by a bureaucracy having no sense of value in history.
Springfield station subsequently re-opened as a café. Then closed.
My media colleague, Simon Williams, had the nouse to set up a Friends of Springfield station community hub. The station café reopened. He and his wife, Lynn, relocated from Christchurch to Springfield and are loving it. 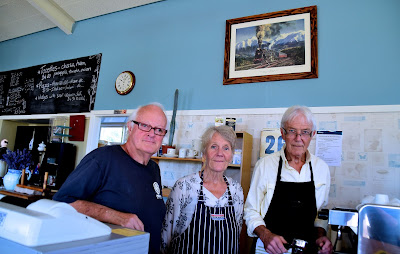 Simon, left, with Gayle and Barry

Simon had worked for TVNZ news. I was a reporter on the Christchurch Press. We both covered the inaugural run of the TranzAlpine tourist train on November 22, 1987. The rail bosses of the day said our efforts contributed to the success of the new venture. The following year TranzAlpine Express won a coveted New Zealand Tourism Award.
Calling on Simon and Lynn, we are soon off to the rail station. We meet Gale and Barry, the latter the competent barista. Along with coffee we enjoy equally excellent asparagus rolls.
The station is almost as it once was. Hence part of it is a museum. Dorothy is an organic plants guru.  She also sells seeds complete with instructions on their plantings in Springfield conditions.
I recall when Springfield was a smoky depot for six husky Kb class locomotives built especially for the Springfield to Arthur’s Pass section. They have long gone. An occasional preserved steam locomotive still passes through Springfield. It will typically head a train load of rail enthusiasts. Diesel-hauled freight trains pass through day and night.

And the famed TranzAlpine pauses twice daily during its return trip from Christchurch to Greymouth. The station café has a contract to provide cheese boards for the train. They have a supply of cheese from Barry’s Bay on Banks Peninsula. 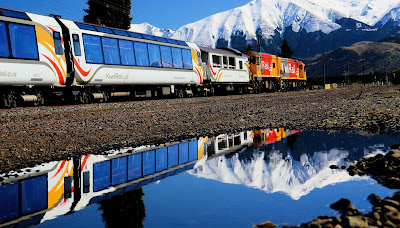 I recall days when retired railwayman, Keith Williams, would bring his border collie, Rosie, to meet the TranzAlpine. Rosie would be treated to a meat pie by one of the train staff. Over time, Rosie consumed over 5000 pies. Needless to say, Rosie lost her ability to chase sheep. And I recall someone once calculated the cost of Rosie’s pies.
Simon tells me he is modelling Springfield on notable railway station preservations in Britain.  He wants Springfield railway station to become a destination. A regular market will be added. Good on him for keeping something from our past alive and exciting. 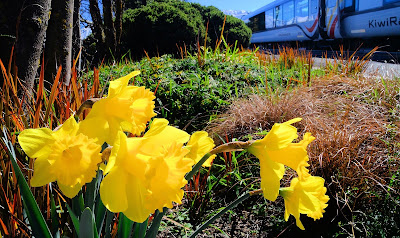 Promoting Peace through boats and bells
This year the New Zealand World Peace Bell has welcomed two Japanese people associated with the Peace Boat. A household name to Japanese, the Peace Boat has been operating since 1983. Calling it a boat, however, is an understatement. Ocean Dream, built in Denmark in 1981, weighs in at about 36,000 tonnes.  Over 30 years it has carried 50,000 passengers of different ages and nationalities. Rather than being on vocation, passengers participate in peace-related projects. A recent voyage that called into Port Lyttelton was carrying a banner asking governments to support the 2017 UN resolution to have nuclear weapons declared illegal. In the cargo hold was a Japanese lantern destined for the Kurashiki Sister City Garden in Halswell Quarry. 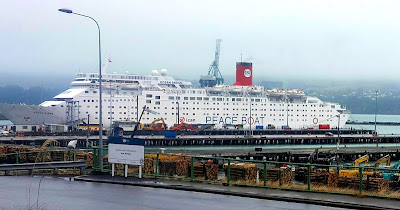 I first heard about the Peace Boat in an obscure way. My partner and I were cycling the length of Japan, heading towards Nagasaki. Some weeks previously, I had signed an agreement with Tomijiro Yoshida, CEO of the World Peace Bell Association in Tokyo, to have a bell gifted to New Zealand. I had discovered the story of Chiyoji Nakawawa fashioning a large bell, similar to a Japanese temple bell, using coins from countries belonging to the newly-established United Nations. The bell was presented to the UN in 1954 with Nakawawa’s message.  ``What happened to my country in 1945 (referring to the A bombing of Hiroshima and Nagasaki) should not happen to any other.’’
While bicycle wheels rolled along Japan, the bell for New Zealand was manufactured. One of our core group members had contacted the Peace Boat having heard it was setting off on its first voyage to New Zealand, calling at Auckland. It was agreed the Peace Boat would carry our bell to Auckland at no charge to us. A postman delivered the 385 kg bell to Christchurch.  Rather than riding a typical postal bicycle, he was driving a large truck.
A stylish pavilion was built for the bell and it was unveiled in Christchurch Botanic Gardens on October 3, 2006.
Asuka Watarai, from Chiba Prefecture, had sailed on the Peace Boat from Yokohama to New Zealand and Australia and beck to Japan earlier this year. She returned to New Zealand and was a guest of one of our WPB members, Antonio Yuge, while in Christchurch.
She enjoyed her visit to our World Peace Bell, the occasion being enhanced by the Botanic Gardens displaying brilliant autumn colours. Asuka looked as if she was trying to hug the bell.  (She would have been welcome to give me a hug. Sadly that did not happen.) 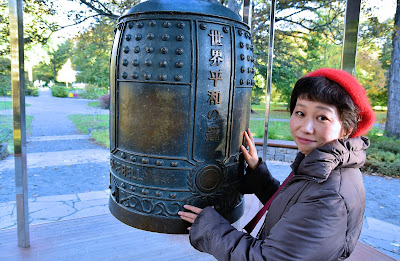 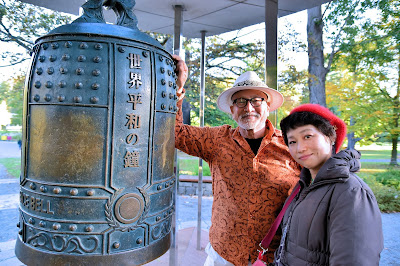 Earlier in the year 82-year-old Michimasa Hirata disembarked the Peace Boat in Port Lyttelton and visited our bell. He had a poignant message, having been aged nine when the Atomic Bomb dropped on Hiroshima. He told about aimless people with skin shredding and eyes popped from their sockets. He spoke also about a network of World Peace Bells worldwide promoting a world without war. 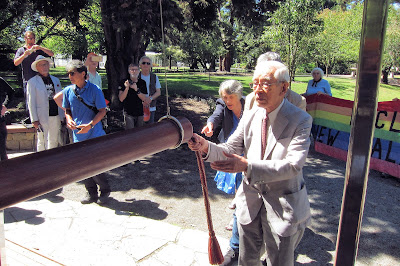 The most recent World Peace Bell unveiling was in Canberra, Australia, It was the 24th bell internationally. 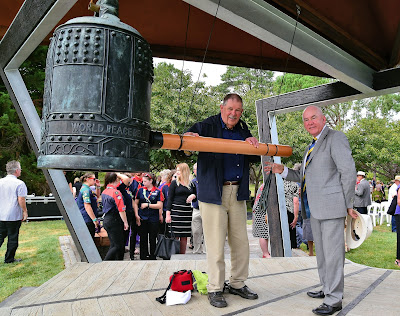 By co-incidence, I am penning this blog on ANZAC Day when Australia and New Zealand, especially, are commemoration their thousands of casualties in two world wars.
Maybe the most appropriate way to honour one’s war dead is to never start another conflict.


Posted by Journeys with Roy at 16:42 No comments: