Organisations for a better world
Just had an interesting weekend supporting two programmes you could say I am a tad passionate about. The first, on Friday evening, was a four-hour spin bike event Tour de Montreal. The moniker is from its location at Ideal Electric at 118 Montreal Street, Christchurch. Of course a spin bike does not go anywhere albeit it records an equivalent distance pedalled.
An annual event co-inciding with tour de France, it is run as a fundraiser for Special Olympics, New Zealand. It is part of an international organisation founded in 1968 by Eunice Kennedy Shriver to provide opportunities for sports people with intellectual disabilities. Special Olympics boasts 5.7 million athletes in 172 countries. 7000 athletes in New Zealand participate in 200 events in 40 locations. 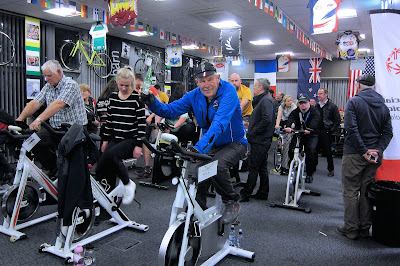 international event is held at regular intervals.
At Tour de Montreal, we pay $100 for a team assigned to one spin bike. Five to a team is a good number. The event is largely organised by an Ideal Electric business manager, Mike Lowden, himself a keen cyclist and runner. 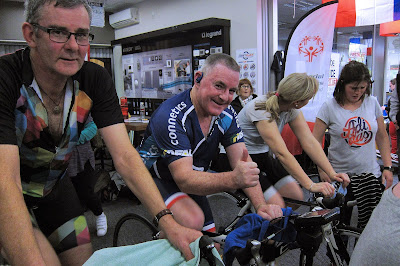 Mike insists it is a fun event able to provide energetic cheer in the depths of a dreary Christchurch winter. He has the premises suitably decked out in bicycle memorabilia. A silent auction and raffles add to the fundraising.
My five, Team Golden Aged, scored about 100 km.
Special Olympic athletes usually participate, frequently proudly showing off medals they have won.
In addition to sport, Special Olympics provides camaraderie and friendship. The goals include winning in sport and life.
This was the third year when I have participated. My first Tour de Montreal rewarded me with a prize for the most ks pedalled. I suspect they generously added in my thousands of ks cycle touring in several countries. 2017 Tour de Montreal earned $9000 for Special Olympics. 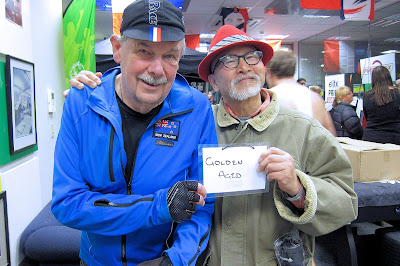 Then the following afternoon I cycled to the George Hotel in Park Terrace to join the farewell for 16 South Island young people selected for the 2017 JET (Japan Education Teaching) programme. JET was founded in 1978 by the Japanese Government to encourage cultural exchange and attract educated English speakers to work in sport and education. 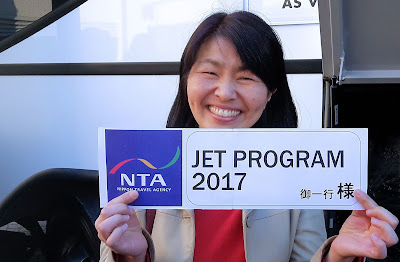 I cannot help but think how attitudes towards Japan have changed since I grew up in post WW2 New Zealand. Japan was considered an undesirable country. I recall trips to Port Lyttelton and seeing train loads of scrap metal. At the dock was a ship with a strange name ending in ``Maru’’ My thinking was, our junk is good enough for Japan. Little did I know our junk was helping to create one of the most advanced twentieth-century countries with, enviably one of the world’s finest railway systems. I was born too soon to apply as a JET candidate but I have ridden my bicycle the length of Japan and founded a peace movement, The New Zealand World Peace Bell Association with its HQ in Tokyo. So you could agree I have done my ``Japan’’ thing. But that does not stop me feeling a tad envious as I wave farewell to departing JET participant. 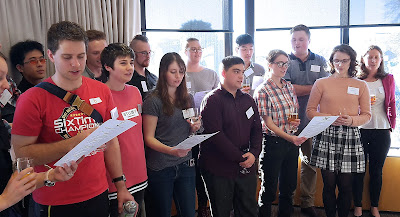 JET people are great to chat with. What a wonderful opportunity for young New Zealanders.
The event was provided by the local Japanese consulate. Consul Mitsuru Murase spoke as did JET programme intervener Rex Johnstone.


Johnstone stressed participants not to be quick to form opinions about Japan. They should appreciate the differences between multi-cultural New Zealand and a mono-cultural Japan. 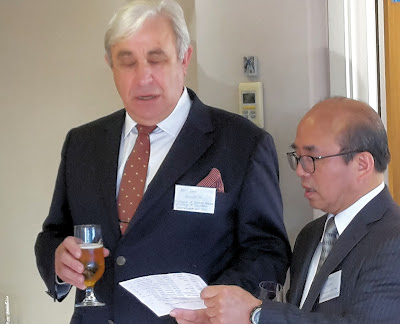 Posted by Journeys with Roy at 18:23 No comments:

I was curious to discover a Japanese name on a figure in the Antarctic wing of our Canterbury Museum. It was Nobu Shirase. Nearby was a model of the Japanese ship Kainan Maru.
Shirase, an unknown army lieutenant, organised a Japanese Antarctic expedition at the time of Robert Falcon Scott and Roald Amundsen.
Little support in the expedition was demonstrated when the 31 metre-long expedition ship sailed from Tokyo on December 1, 1910. The event was witnessed by a handful of students. 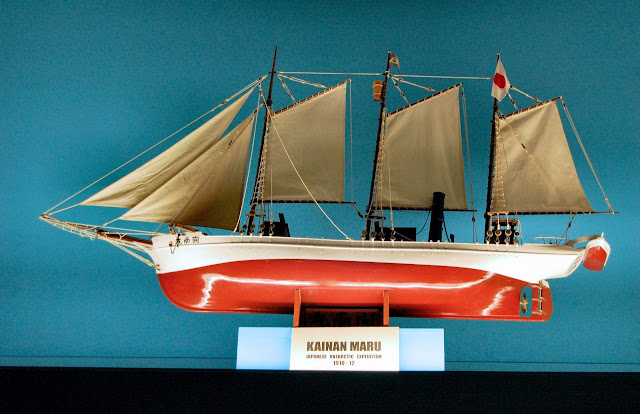 Kainan Maru arrived at Wellington, New Zealand on and four days later departed for the Antarctic. Poor weather was experienced, their first encounter of icebergs coming on February 26. Clawing their way south through the drifting bergs, the coast of Victoria Land was sighted on March 6. Poor conditions rendered landing impossible. They sailed on through the Ross Sea towards Coulman Island only to find the weather worse than what they had left. Snow fell continuously, storms pounded them and soon they found themselves surrounded by a heavy ice pack. It was impossible to go further so Shirase ordered the depressed crew to turn the ship northward for .

Their arrival in Sydney was not welcome. Wellington was also reported as unwelcoming to the Japanese. Racism was rampant in New Zealand and Australia.

Eventually sailing south once more the expedition spotted another ship in the Bay of Whales. Turned out to be the Norwegian Fram awaiting the return of Roald Amundsen. Japanese and Norwegians mixed well despite language difficulties.

A Japanese dash attempt to reach the South Pole was unsuccessful but other expedition members made the first landfall at King Edward Vll land and part of the Ross Ice Shelf. They also were able to climb a 50-metre high ice slope and go on to reach the foot of the Alexandra Range, which until then had not been seen at close range. A large crevasse prevented them from reaching the summit of the mountains but a memorial board was erected to
commemorate the journey.
After the men returned, Kainan Maru made her way back to the Bay of Whales. The wind was against her and it was not until February 2, 1912 that she could enter the bay.
Heading north the expedition called once more at Wellington and reached Yokohama on June 20. The expedition had sailed over 30,000 miles since leaving Japan and despite not reaching the Pole, they had achieved all their other goals after departing from Australia.

In contrast to their departure, their welcome home was to an enthusiastic reception. Nobu Shirase died in 1946.
As far as I know the model of Kainan Maru was made in Japan. I did hear that when it arrived in Christchurch it was sailed on Victoria Lake in Hagley Park.

When my Japanese photographer friend Tatsuro Okazaki, a keen photographer of sail boats, photographed the model Kainan Maru. He sent me his images. Being a deft hand at Photoshop he used his creative imagination and combined the model with an image of the ocean. 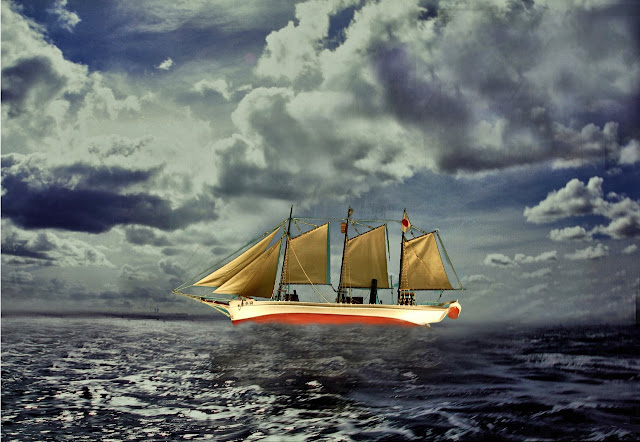 Posted by Journeys with Roy at 20:57 No comments:

And they are at it again

What is it with our trans-Tasman neighbours? Are they really envious of us kiwis? They claim so many things Kiwis say are ours.
The latest is the 2017 America’s Cup win.
The Aussie claim is based on Team NZ skipper, Glen Ashby, being an Aussie.
Then so was skipper of Oracle, Team NZ’s opponent.
But let’s not debunk our Aussie neighbours in sport.
Their Wallabies won the Rugby World Cup on two occasions.
Aussie cyclist Cadel Evans won tour de France in 2011.
Kiwis have accused Aussies of claiming Phar Lap, Eye surgeon, Fred Hollows and the sickly-sweet pavlova.
And there is a question mark over a flat white. 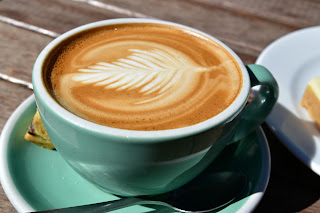 The coffee was derived as a no-nonsense choice similar to but without the snobbery of the European latte or cappuccino. Ordering a flat white was okay for a bloke.
But was it a café in Sydney or Auckland that came up with the concept?
I recall the popular Aussie television drama Flying Doctors claiming Sir Edmund Hillary as an Aussie.
But what about other claims?
Phar Lap, the legend of Aussie horse racing during the 1930, was definitely from New Zealand, somewhere in Canterbury I recall.
But its owners clearly did not want the young stallion. They sold it to Aussie at a basement price. Phar Lap would have been a nonstarter had it not been for stable hand Tom Woodcock. It is said Phar Lap wouldn’t east if Tom was not close by. So Aussie, in my book, can rightly claim Phar Lap.
Fred Hollows, awarded several honours including Australian of the year in 1990, was a world-renowned eye surgeon who restored site in third-world countries. He was born in Dunedin but his rough and ready manner accompanying tremendous skills suited Australia. I doubt if he would have made it in New Zealand.  Many Kiwi medical gurus had little good to say about him until Australia began to pile honours on Fred.
So I am happy for Aussies to also claim Fred Hollows.
Sir Edmund Hillary’s origins and country commitments cannot be challenged. He was undoubtedly Kiwi.
Pavlova origins are less clear.
I suggest the pavlova is merely a meringue with a few yuck-filled additions. Or a meringue on steroids.
``Meringue’’ is apparently a word of unknown French origins.
But the Swiss claim the gnome-shaped teeth scraping sugary treat made with beaten egg whites and adding copious sugar.
I discovered this when cycling from Interlaken to the gruelling Brunig Pass.
We stopped for lunch in a small town, Merringen. Curiously, close to the café was a life size statue of a pensive Sherlock Holmes. 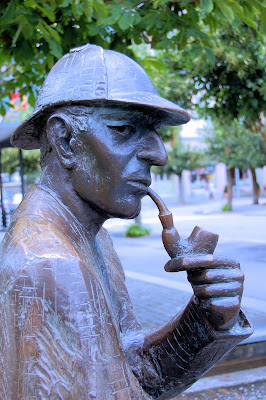 It was near here, at Reichenbach Falls, the fictional super sleuth had his final battle with the Napoleon of crime, John Moriarty. Holmes was left for dead at the bottom of the falls.
The town, Merrigen claims the similar sounding meringue. The confectionery was subsequently improved by an Italian chef named Gasparini, first appearing in cook books in 1692.
So, Aussies and Kiwis both miss out on that one. 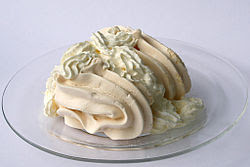 Posted by Journeys with Roy at 16:45 No comments: