Creative identity emerges from wreckage
I am enjoying most of the reemerging city of Christchurch where I live. The central city is taking shape following devastating earthquakes in September 2010 and February 2011. The latter cost the lives of 185 people, many of them visiting students. From the wreckage some interesting things have emerged. The most noticeable is street art that appeared on walls left blank in the wake of demolished buildings. One of the first murals to attract attention was a portrait of a model, Teresa Oman, on a brick wall bordering Quest apartments in Worcester Street. It was the work of Rone, a street artist from Melbourne. 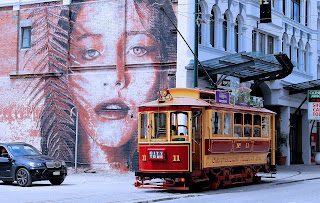 Rone mural Worcester st
Others followed. Murals were also adorning blank spaces of new buildings. Street art was transforming the city and providing an alternative identity. Some began while the central city was mostly cordoned off and under guard. Maybe it was an exercise in distraction from earthquake wreckage. Creativity was becoming a factor in the rejuvenation of the city. An element of comedy accompanied some of the art.  Two street art gurus, George Shaw and Shannon Webster, in 2013, founded New Zealand’s first street art festival, Oi You! Rise in co-operation with Canterbury museum. The festival roped in famous street artists internationally including Banksy. Rise won the New Zealand museum show of the year. The festival encouraged street art as something introducing a new energy to the uncrumpling city. Along with imported street mural painters, locals joined in. Owen Dippie from the North Island gave us Dancer’s last bow adorning the rear wall of the rebuilt Isaac Theatre Royal. This became a favourite. 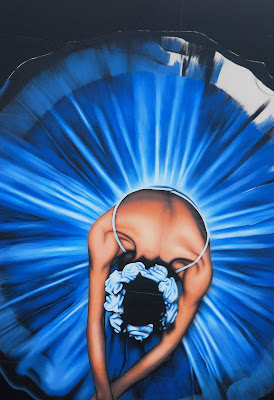 Creativity knew no boundaries as demonstrated in the most recent mural I photographed. It is an eye-catching three-dimensional illusion on the Otautahi building in the SALT district. SALT is an abbreviation of bordering streets –St Asaph, Lichfield and Tuam. SALT is in Tuam Street opposite Alice Cinema. High Street lanes are integral to SALT.  The district will become an attraction on the High Street tram route extension. The Otautahi mural is the concept of Oi you! festival creators, Shaw and Webster. They wanted to continue the Street Art theme in the SALT district development.  Otautahi presented a mammoth challenge. Following a time staring at a blank wall they engaged signwriter Paul Walters and graffiti artist Guy Ellis, the latter working under the moniker DCYPHER. They finalised their three-dimensional illusion design and went to work. Five artists with buckets of house paint spent two and a half weeks to complete the mural. It was lined out with a rule and marker. No masking tape was used. Straight lines were hand painted.  Illusion it may be but it looks as real as it is spectacular. 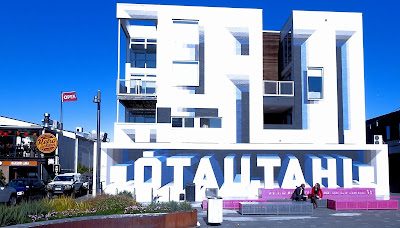 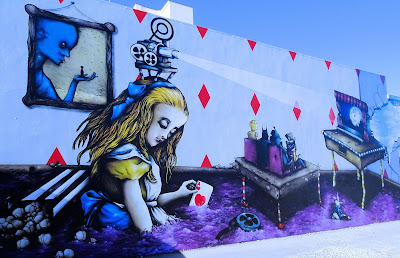 ● Christchurch is recognised as one of the world’s notable street art cities. It is included, generously, in a lavish Street Art guide by Lonely Planet. 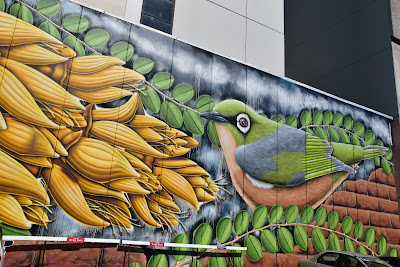