Street art is one good reason to visit Christchurch, New Zealand. A new Lonely Planet guide, Street Art highlights Christchurch as a Street art capital along with 39 other countries. Authors tell us street art is a feature of almost every city, from Aachen to Zwolle. Christchurch is a standout. It was an idea following the 2010-11 earthquakes that trashed many buildings leaving a host of unsightly blank walls.  They were not unsightly for long. Legal murals associated with the city’s RISE festival (a first for New Zealand) began with Melbourne street artist Rone. His Worcester Street work featuring fashion model, Teresa Oman, was an immediate hit. 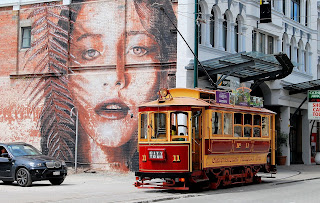 Others soon followed including murals by mostly New Zealand and Australian artists. Canterbury Museum staged a highly successful street art exhibition featuring the work of Banksy and other international street artists. Many works were humorous, attracting a smile from passers-by. Some, such as the Seb Humphreys nude on Calendar Girls building (tasteful in my opinion) were controversial. All were spectacular. 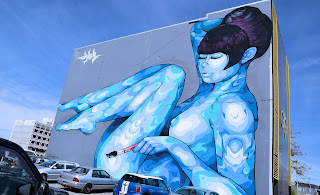 RISE festival commissioned a dozen artists to paint giant murals. The final work, Dancer’s last bow on the rear of Isaac Theatre Royal, by Bay of Plenty artist Owen Dippee, is arguably the most popular. 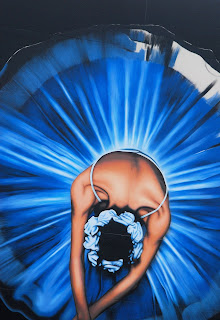 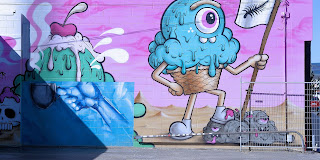 Interestingly, the idea did not remain with walls of demolished buildings. Murals began to appear on the blank walls of new buildings. Seems street art in Christchurch will flourish into the future. All good for a, literally, bright future. Riding the Christchurch heritage tramway (operating daily) is a good starting point for a street art experience. 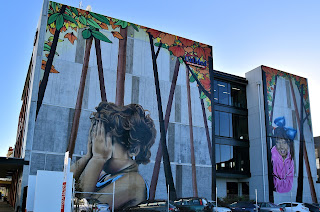