Scaling heights –the easy way
Switzerland is a compact country. About 7.5 million inhabitants squeeze into a land mass similar in area to Canterbury and Westland in New Zealand’s South Island. Fitting their country, Swiss people might be compared to an oversized Kiwi (New Zealander) struggling into an all-too-small pair of jeans.
No-one would call Switzerland’s landscape of Alps compact. Despite their impressive heights, some can be easily summited with a combination of mountain railways and cable cars.
It is no secret I have enjoyed scaling mountains sometimes with crampons strapped to my boots. And always having a long-handle ice axe to lean on and arrest an accidental glissade. Heights have also been scaled by bicycle –the pinnacle being Cole de la Bonnet (2802 m) in French Alps. The most recent summit achievement was Stanserhorn (1898 m) in Switzerland’s Nidwalden Canton. Stanserhorn is part of the Uri Alps. Interest in Stanserhorn was sparked several years ago Fabienne Huber, a Stanserhorn marketing guru visited the Christchurch Tramway and met motorman, Ken Henderson. Her visit was just prior to the devastating Canterbury earthquakes of 2010 and 2011. Contacts were exchanged at a time when I was planning a solo trip to Switzerland to tackle some outstanding bicycle journeys.
Fabienne treated me wonderfully when I visited Stanserhorn in September 2010.
I took a day trip from Luzern. A 20 minute train ride landed me in Stans, a short walk from the Stanserhorn Bahn terminal dating to the 1890s when a three-section funicular railway was opened. 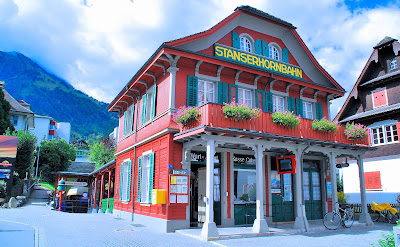 Upper sections of the railway, wiped out following a lightning strike and fire in October 1970, were replaced by a cable car in 1975. The funicular equipment operating on the lower section was likely the same as were there when the funicular opened in 1893. It was then one of the world’s longest funicular railways and first mountain railway to be powered by electricity. The conductor, Robert, treated me well with the best seat for views and a running commentary. 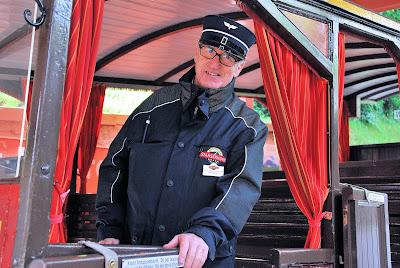 From the top cable car station I summited Stanserhorn. It’s a 15 minute walk up and down passing some skittish entertainment that included a Heidi house. Poor Alpine views were amply compensated by Fabienne’s lunch hospitality in the Stanserhorn revolving restaurant. 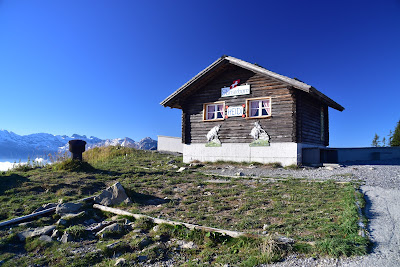 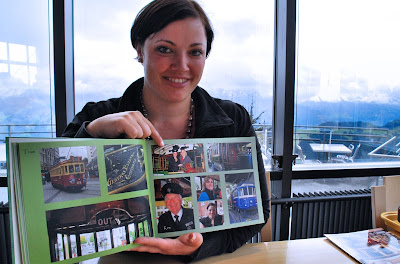 I was informed about upcoming changes in the form of CabriO a double-deck cable car. An impressive poster was displayed at the Stanserhorn Bahn base station. CabriO opened in June 2012. It is designed to carry 60 people on the 1100m vertical climb over the 2320m long cable. Climbing at eight metres/second, the CabriO ride is just over six minutes.
Returning to Switzerland in September 2018, with my partner, Haruko, Stanserhorn and its new CabriO were high on the agenda. I had since met Fabienne again in Christchurch. She wanted to experience the post-quake city. She filled us in re CabriO, particularly its safety features to eliminate woes associated with other European cable cars. CabriO is the innovation of Swiss cable car manufacturer, Garaventa AG. CabriO is Swiss from the original concept to the last screw.  It was the world’s first cable car with an open upper deck.
Our trip up Stanserhorn is postponed one day. We meet Fabienne for coffee and chat. Next day’s weather is promising. Against the odds I am somehow at Stanserhorn Bahn in time for the first funicular railway departure at 8.15 am. 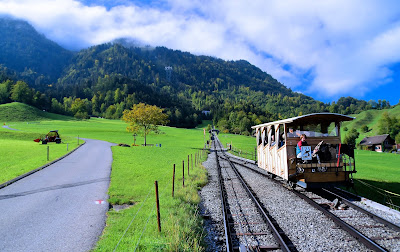 It is chilly and cloud is low on the mountains. The funicular trip is much as it was eight years previously. We transfer to Cabrio and head for the open deck as if we are metal objects drawn to a magnet. . During the fast climb through cloud it resembles something from Biggles. What little hair I have is ruffled in the stiff breeze. Being early we have the open deck almost to ourselves. The freezing morning contributes to our free space.

Mountain peaks increasingly play hide-and-seek with clouds. At the top station we have burst into clear blue sky. The view above the clouds presents the great peaks of Central Switzerland –Monch, Jungfrau and Eiger. We have been landed in an Alpine wonderland suspended magnificently above sunlit cloud and fog. As the morning warms CabriO intermittently arrives with its upper deck crowded. Stanserhorn is undoubtedly one of the best experiences in Switzerland. 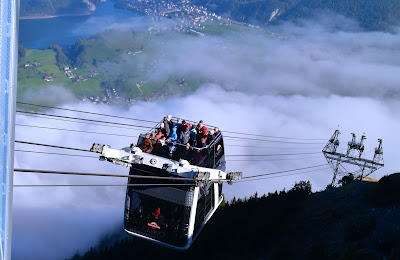