I visited Prague
Prague is so crowded, even in September. This is unexpected, my thinking the summer tourist rush would have been over. Maybe the warm summer jettisoned into autumn has brought the locals out?
I had been intrigued by this country from seeing Czechoslovakia on stamps when I was an aspiring young stamp collector. For some reason stamps from Czechoslovakia were common in schoolboy-affordable bargain bags from stamp shops. Those days I never thought I would visit the country’s capital, Prague.
Czechoslovakia has a chequered past instigated by Nazi reprisals of WW2 followed by a Soviet-backed coup. Later, on the first day of 1993, the embattled country was dissipated to become the Czech  Republic and Slovakia.
Getting to Prague is a pleasing three hour train journey along the Ebony River from Dresden in East Germany.  We glide past fascinating castles and other sites. I am thinking this would have been a prize bicycle touring route. Everything is pristine particularly along the German section –reflecting Germany’s vigorous environmental efforts.
Despite Czechoslovakia being an EU country, it has stuck to its complicated Czech Krona currency rather than adopting the simpler Euro.  Paying our beer waiter is an exercise in confusion, especially with my Euro mind-set, having previously been in Germany. The city (pop. 1.281 million) is delightfully ancient European. No wonder it is known as the ``City of one hundred spires’’
The old town of narrow cobbled streets is a gem. It was laid out during the fourth century. It has impressive cathedrals surrounding the town square. It is especially famous for its medieval Astronomical clock. Regrettably it is disguised by scaffolding and tarpaulins while under repairs. Anything 600 years old is likely to need major rebuilding.  Cannot imagine the work that will be required on me when I am that old? In action, the clock exhibits an animated display on the hour. 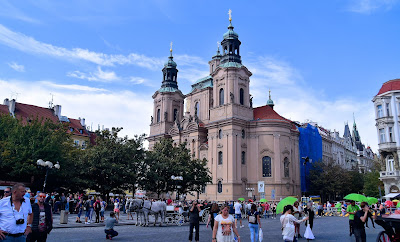 Old Prague
I discover many curiosities including a special Tobacco and Alcohol shop, a live bronzed motorcyclist statue reminding me of our Burt Munro and a street-side BBQ offering grilled piglet. 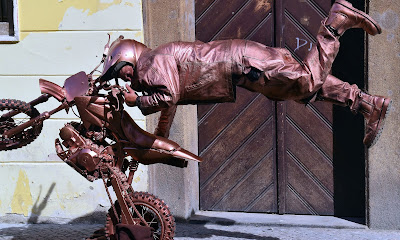 Bronzed motorcyclist. He gives me a wink.

A Prague highlight is walking over the picturesque 14th-Century Charles Bridge linking the old town to the slightly more modern Prague and the castle where Czech rulers have resided for more than 1200 years. The bridge is named after King Charles IV who, in 1402, instigated its construction over the Vitava River. 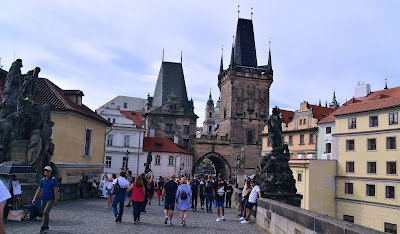 The many statues of, mostly, Catholic saints are complemented by animated artists and musicians. Musicians perform with amazing emotion. I surmise that is the Czech style. 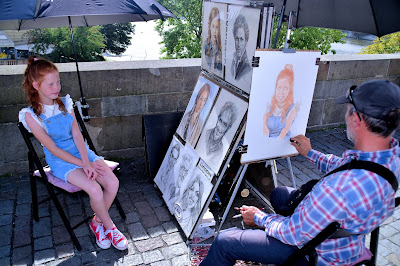 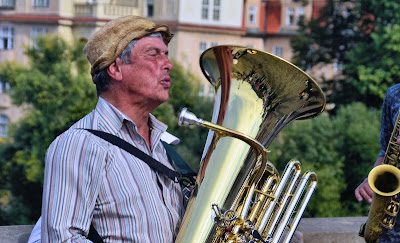 The bridge is so crowded. Many set out to cross it early in the day. Predictably the old town and Charles Bridge has offered many movie locations. A short documentary of 2011 is Art on the Bridge.
The slightly more modern Prague has a busy tramway (light Rail metro). Some classic vintage tramcars have modernised and still operate on the system. Unlike many European metre-gauge tramways, Prague’s tramcars run on Stephenson’s standard gauge (1435 mm) Route km is 518 on which 857 tramcars operate. 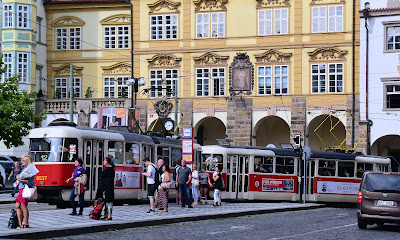 And the Czech beer is totally wonderful. A pilsner Urquell is popular on warmer days.as are some tasty dark beers. No wonder the Czech Republic boasts the world’s most beer drinkers per capita. To drink beer in Prague is to partake in a cultural experience.  We are delighted to participate.